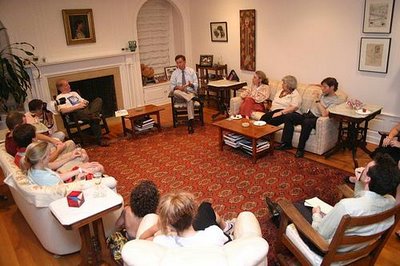 A new poll shows him surging ahead of Sen. Joseph I. Lieberman in the Democratic primary, but Ned Lamont still was bemused Thursday night to find he suddenly needs no introduction.

At a Windham house party where the hostess offered the barest of introductions, Lamont told supporters, "Nobody ever said, `Here's a guy who needs no introduction.'" He smiled and added, "I think we're doing OK."

"Clearly the momentum is on Lamont's side. He's come out of nowhere," said Douglas Schwartz, the poll's director.

By conventional measures, the new poll is confounding. It follows Lieberman's dominant performance in their only televised debate and a sustained advertising campaign by Lieberman to define the little-known Lamont as an opportunist with one issue - his opposition to the war in Iraq.

The poll suggests that Democratic primary voters are tightly focused on Lieberman's support for the war in Iraq - and are not swayed by attacks on Lamont's scant public record as a Greenwich local official.

Even though 39 percent of voters found that Lamont lacked "the right kind of experience to be a U.S. senator," a majority of likely Democratic voters said they are ready to jettison Lieberman after 18 years in the Senate.

"It's a dramatic change in the race," Schwartz said. "This is a surge for Lamont. It's rare to see such a big change in a race. We've seen a 19-point swing."

On May 2, 93 percent of voters said they knew too little about Lamont to offer an opinion, but Lamont has since hit significant milestones.

Schwartz said that Lieberman's decision to hedge his bets with a petitioning candidacy indicated that the candidate's internal polling mirrored the numbers Quinnipiac released Thursday.

News of the poll followed Lamont throughout a day of campaigning, which he had hoped would spotlight his proposal for universal health care.

At a press conference outside a medical building in New Britain, where patients squeezed by reporters, Lamont said he favored forcing employers to provide insurance, while allowing them to cut costs by buying into larger insurance pools.

But the first questions posed addressed his new standing in the polls.

My guess is that the Lebanon-Israel fiasco is also hurting Joe, who has allied himself with an administration that is screwing everything up.

I didn't think that Lieberman was very dominant in the debate...

Greets to the webmaster of this wonderful site! Keep up the good work. Thanks.
»