"Where can I see Joe Lieberman?"

This week I received an email from a registered CT Democrat, who wants to hear Joe Lieberman's views on the issues. This person is undecided about who to support, and she wants to hear both candidates speak in person before making up her mind.

Of course, I immediately pointed her toward Ned Lamont's Events page, where anyone can usually find an event near their hometown where Ned will speak. He's very accessable in that way. 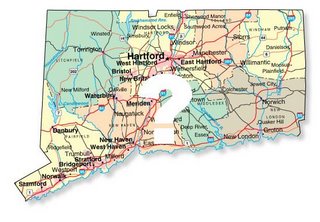 Then I checked into Joe Lieberman's website. I couldn't find a thing. Not one single publicized event where he'd be appearing. It seems that Joe is running a stealth campaign; where all his appearances are closely held secrets until after the fact. Joe seems to think he works much better in sound bites than when actually having to think and respond to honest questions.

And that makes sense, in a way...why would Joe want to hear from actual Democrats who may question his actions, such as his intent to flee the Democratic Party should they choose someone other than himself on August 8th?

As Maura Keaney discovered in Stamford recently, posing those kind of questions to Lieberman will result in your character being attacked, ("...she's a Lamont plant!"), and your question being dismissed with an annoyed wave of Joe's hand.

So, in my email back to the woman who wrote me, I had to tell her that I had absolutely no idea where she could see Joe Lieberman. His campaign seems to be a total secret, known only to a few select insiders who will support his every word with unabashed hero worship! (To tell you the truth, I'd rather undergo a root canal sans novocaine than have to deal with that kind of crap!)

But, this woman still wants to see him. So I wrote back:

"If you want to see Joe Lieberman, you might get lucky and catch a few seconds of him on the TV news. Then go hear Ned Lamont speak live, and personally ask him about the issues."

This site is one of the best I have ever seen, wish I had one like this.
»