Has anyone seen Joe Biden? 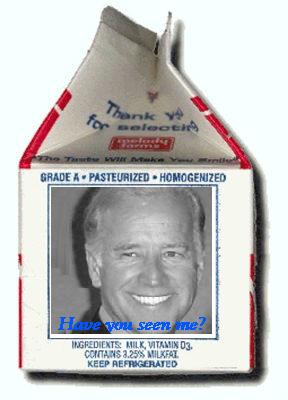 Apparently when it comes to rearranging the deck chairs on the Titanic (which is how I view Lieberman's campaign), Senator Joe Biden has much better things to do.

From this article at My Left Nutmeg:

A hastily scribbled account of the Joe Lieberman Joe Biden event in Stamford, by MLN agents on the inside...

The event started at 11 AM at Tigin, an Irish Pub in Stamford. The Irish Democrats were hosting, an organization I haven’t heard of before. Apparently they were formed to support Bill Clinton after the Good Friday agreements. Coffee, OJ, danishes were available.

About 11:30 the room got word that the Senator was arriving. He came in the back door. Don’t know if this had anything to do with the pair of MLN “agitators” with signs out front.

But wait –- that’s only one senator. Where’s Biden? The word is that Biden couldn’t make it. Was trying to catch a train in DC, something like that.

The intro for Senator Lieberman called him “Stamford’s favorite son” and said that he is one of the few Senators who is very aware of the few hundred thousand Irish “illegals” working here in the US, and their situation. (Yes, she used that word.)

Q: You said that if you vote with the party 100% of the time, the party is in trouble.

Joe: Well I don’t think I meant that, etc. etc. Will Rogers said, “I don’t belong to an organized political party, I’m a Democrat.” Let’s agree that we can do a better job.

Questions about the sectarian violence in Iraq and others. Responses not really noteworthy.

Senator Lieberman was supposed to go out front and greet people on the street, but he did not, even though his T-shirted supporters lined up with placards waiting for him. Instead he went back out the back door of the pub to the parking lot. The campaign folks got the kids to stand on the street for a bit and hold up the signs to passing cars.

Overall I’d say there were about 5 staff-staff members there, perhaps more, about 12-15 intern/volunteer types, and maybe 25-30 people in the crowd. They seemed to be people from the Stamford DTC, a couple people from New Canaan and Greenwich, and State Party types. Some were apparently from this Irish Democrats organization. Quite a bit of print and TV media for an event that size.

THIS JUST IN: Maura just posted this first-person article describing her encounter with the junior senator from CT:

When I initially heard that Joe Lieberman and Joe Biden would be appearing together in my hometown of Stamford, I had no interest in attending. A friend of mine tried to RSVP for the event, though, and was told that it was open only to "Stamford Irish Democrats".

Since I'm an Irish-American Democrat from Stamford and I'd never heard of this group, I decided to stop by the event to learn more about this organization. Given that Joe Biden is the only high-profile Senate Democrat to be willing to campaign with Joe, I thought it would be a bonus to see what he would say to reporters about Joe threatening to run as an independent if he loses the primary.

I planned just to be a fly on the wall at the event, figuring it would be a huge crowd. But when Joe Lieberman repeated the lie that Ned Lamont is running a "one issue" campaign and then said that Lamont lacked "courage and integrity", it really got my Irish up and I decided I wouldn't stay quiet. The fact that it was a very small crowd meant that, unexpectedly, my question got quite a bit of press attention.

I arrived about 15 minutes before the event was to start, and the place was virtually empty other than about 20 Lieberman staffers roaming around. I was only the second person to sign in. Although other people had been told that the event was closed to the public, I had no problem whatsoever getting in.

What really got me to change from "fly on the wall" to "gadfly" was when, in response to press questions, Joe Lieberman repeated the lie that Ned Lamont is running a "one issue campaign" and that Ned Lamont was running against George Bush rather than having the "courage and integrity" to run aginst him.

So when the press questions were over and Joe started drinking Guinness and schmoozing with the crowd, I joined the people waiting to shake hands with him. When it was my turn, I shook his hand and introduced myself as a lifelong Democrat who also grew up in Stamford and went to Stamford High, like him. I said my dad had been a longtime customer of his dad's package store on Hamilton Avenue, and he said, "Really? What was your dad's name?"

And said something like, "Frank Keaney? Oh, I think I know him well..." (which is not true, but Joe's definitely a masterful schmoozer)

So I told him that my dad passed away in March, and he said he was sorry and asked how old my dad was. I said he was 82 and that he voted for Democrats in every election after he became an American citizen, and then said I something like (paraphrase):

"My dad was a very loyal Democrat until he died. You mentioned how Irish American Democrats are great supporters because they're not fair-weather friends, and I totally agree. So why are you being a fair-weather Democrat, saying you'll only respect the results of the Democratic primary if you win?"

All of a sudden I found myself with a bunch of microphones in my face. Joe looked slightly stunned, and then started in on his usual talking points about how he wants even more Democrats to have a chance to vote for him in November and that not all Democrats know that they have to come out for a "hot day in August".

I said, "Don't you think Connecticut Democrats are smart enough to know on what day to vote?"

He said, "I hope so" and then started to wave me off.

I forget exactly what words I said after that (there is video and audio out there somewhere) but I said something like, "Look, if you win the Democratic primary, I'll be supporting you and I wish you would agree to support the winner, too" and he said, "Well, let's make sure I win in August, then!" and waved me away, after which I was mobbed by reporters asking how to spell my name.

I was really shocked at how much attention my comment got, since I didn't shout it out to get attention during Lieberman's talk, but rather approached him one-on-one. Apparently, some Lieberman staffers told reporters who were talking to me that I was a Lamont campaign plant, which is completely untrue.

Joe Lieberman needs to realize that ordinary Irish-American Democrats aren't just going to lap up his pandering without asking tough questions, and if he wants to talk about fair-weather friends, he should stop being a transparent "fair-weather friend" to the party.

Funny how Lieberman's staff immediately accuses any concerned Democrat who dares ask an honest question of their exalted leader of being a Lamont "plant". I guess there's a bit of a siege mentality going on in the Lieberman camp.

I've seen similar instances where Ned Lamont is questioned by the rare Lieberman supporter. Lamont takes his time to listen to the question, then answers it honestly. No accusations are made, no hard feelings. Just honest and open communication.

Hi Bob, welcome back! I gather Biden has issues with Dunkin Donuts. Someone at FDL suggested there was on at the Stamford train station. The horrors!

Hey mui! Great to be back.

Joe has issues with 7-Eleven. Maybe he didn't get his "Big Gulp" of coffee today which could explain why he missed his train...