Irving Stolberg served two separate terms as speaker of the Connecticut House of Representatives in the 1980s. He wrote this commentary in the Hartford Courant today:

No More Joe:
`Dead Wrong' On The War And Defense Of Bush, White House Excesses

Joe Lieberman and I have been friends and colleagues for 38 years. We ran for and won seats in the Connecticut legislature as a team of reformers in 1970. He was my state senator and I was his state representative. He rose to Senate majority leader as I became speaker of the House. With others, we formed the Caucus of Connecticut Democrats, a progressive coalition, to further the causes of peace in Vietnam and justice at home. 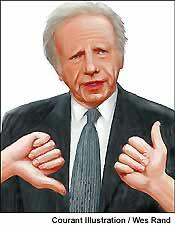 I have supported him in every election he has had - until now. This year I am supporting Ned Lamont to unseat Joe. Almost four decades of friendship with Joe has made this a wrenching decision for me.

As Joe points out, his record on a number of issues, such as the environment, is good. But on the two biggest issues of our times, he is dead wrong.

His blind support of the Iraq war, begun illegally and a continuing catastrophe, is monstrous.

And his defense of an incompetent president, a vice president who fits the dictionary definition of fascism and an extremist administration that has perpetrated torture, illegal eavesdropping and a general shredding of the Constitution is insulting to the people who elected him in the first place.

Joe's constituency is not Bush and Cheney; it is the progressives and moderates, the blacks and Hispanics who gave him his start in politics. We feel he has betrayed us by becoming "Bush's favorite Democrat."

His announcement that he will not support the winner of the Democratic primary but will seek election as an independent if he loses the primary seems to put self above principle. I thank Ned Lamont, a good and decent man, for giving the people of Connecticut a real choice. We need someone who will confront the Bush-Cheney evils of lies, manipulation and incompetence, which have done us so much harm at home and abroad.

I think he said it all perfectly.

yeah, he really nailed it.

I am amazed at the legions of long-time Lieberman friends who had the courage to publicly state that they could no longer support Joe's destructive policies, and have thrown their support to Ned Lamont.

It takes a lot of guts to go against a good friend, even when he's wrong.

Your site is on top of my favourites - Great work I like it.
»

Hmm I love the idea behind this website, very unique.
»

Looking for US.... If you are like me it seems like there is never enough time in the day.. You get home late and leave early.. then the weekends thats another story by itself. My wife has found it easier to hire somebody if you we need help with home remodeling. She fond a great site for home remodeling at http://remodelinghelp4u.com and wanted to share it with you.. Im glad to find help when I need it.. I hope you have great luck remodeling your home...