Wouldn't it be ironic...

...if on this coming Monday, former President Bill Clinton pulls a "Joe Biden" and somehow "misses his train to Connecticut"? 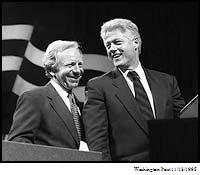 Bill and Joe in happier times
Jesus, how far back in the archives did they have to dig to find a photo where Clinton and Lieberman appeared to be friendly with each other? The picture below is probably more like how Bill remembers his sanctimonious and unctuous "friend": 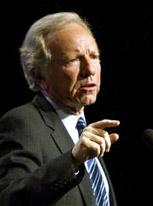 Yeah, I'm sure that awful self rightous finger-waving image is indelibly etched deep in the former President's mind. Bill is known to hold grudges. It might be time for a little payback, Arkansas-style!

Now, I'm not saying that this is likely to happen, by any means, but if I was Bill Clinton and I wanted to embarrass the living shit out of Lieberman, I'd be tempted to leave the guy standing alone on the stage, for all the media to see.

Then Bill Clinton would throw his full support to Ned Lamont, who easily defeats Lieberman in the primary and goes on to win an unprecedented 90% of the vote in November.

This is usually about where I wake up.

I think it would be great if Bill missed his train...imagine the headlines

Yeah, I think we'd see a little bit of news coverage if that happened!

Say it ain't so Bubba, If Joe is not willing to back the Democratic primary winner why would you back Joe.

Clinton visit on Monday in Waterbury - 4 p.m. Monday at the Palace Theater.
The LIEberman campaign will be holding a lottery this evening to distribute tickets to the public interested in attending.

Jon Kantrowitz :: Go See Clinton Visit - Monday in Waterbury - 4 p.m.
If you are interested, this is what you need to do:
1. Send an e-mail to Marshall@joe 2006.com , or
2. Stop by the Lieberman Waterbury campaign office at 86 Bank Streeet and sign up.
The lottery drawing will be held tonight and winners notified.

Winning tickets must be picked up at the Waterbury office Saturday and Sunday from 9 a.m.to 9 p.m., and on Monday 9 a.m. to noon. A valid photo ID will be required for admittance.

I really enjoyed looking at your site, I found it very helpful indeed, keep up the good work.
»