At least they had a good run 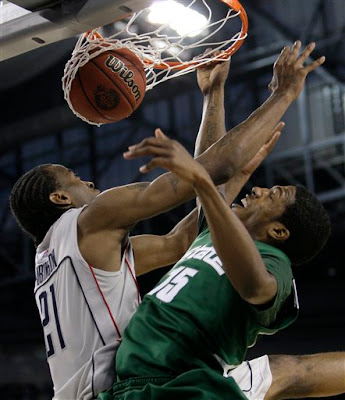 They got farther than I thought.

Really, though, they looked listless throughout that game; the first full press coming with 10 min or so left? Maybe Calhoun has lost the hunger...

They were definitely off last night. Sloppy ball control, slow defensive coverage, lack of both offensive and defensive rebounds, and crappy foul shooting totally did them in.

Not to take anything away from Michigan; they played like winners last night, and being in front of basically their home crowd definitely fired them up. Now I'm hoping they win Monday night.

As (I think) Lombardi once said, "The hungriest team is the winning team".

I think he was talking about winning (about which he knew a lot) and not nutrition (about which - I believe - he wasn't so well informed)....

Be that as it may, MI certainly had the greater urge to win.