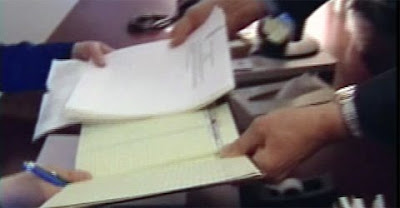 The same-sex marriage bill leaves the governor's office as quickly as it arrived from the Senate -- only with a veto letter added on.
Another giant step in the battle for equal rights was just taken, when the courageous legislators in Vermont overrode the Governor's veto of a same-sex bill this morning.

MONTPELIER, Vt. -- A ten-year battle to grant same sex couples the legal right to marry culminated in a dramatic political showdown Tuesday at the Statehouse with the house voting to override Gov. Jim Douglas' veto of the gay marriage bill.

The House voted 100-49 to override the veto Tuesday. The vote tally was greeted by rousing applause in the House chamber.

The state House and Senate sent the bill to the Governor’s office Monday evening where, as expected, it met with rejection.

The Senate began the override debate at about 10 a.m. as lobbying continued in the House chambers nearby. "This is our moment," Sen. Peter Shumlin told senate members as the Senate debate began.

The debate was short as the Senate voted to override Douglas' veto 23-5.

Now it remains to be seen if the Connecticut legislature can possibly work with the same decisiveness as their Vermont counterparts. You can expect howling from the religious right in response, because their entire philosophy is based not upon the worship of their god, but making everyone else conform to their own beliefs.

And Vermont governor Jim Douglas will forever be remembered as the coward who tried to veto civil rights.
Posted by CT Bob at 4/07/2009 11:32:00 AM

Leave it to Vermont and Iowa to be the most progressive states in the nation, shame on us here in California for passing Prop 9. Whether you call it Gay Marriage or Civil Union, the basic premise is that every person should have equal rights. It’s good to see that some states are progressing, I made a list on my site of the states I think will legalize Gay Marriage first: http://www.toptentopten.com/topten/first+states+that+will+legalize+gay+marriage

I've decided to stop calling it "gay marriage" and will only refer to it as "same sex marriage" from now on. Plenty of gay people still indulge in a sham "straight" marriage, and that doesn't make it non-binding, so it would be more accurate to refer to it as "same sex" rather than "gay". With "same sex", there ain't no doubt that two people of the same gender are being married.

I see it as a violation of the "separation of Church and State". Marriage is a religious institution and the government is, and has been, violating that by interfering with it. Give the word marriage to the religious and make everyone file for a civil union. Problem solved and less hate in the world, which is coming from both sides.

Average Joe in the middle