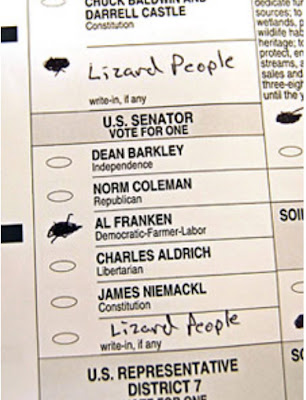 (wouldn't it be ironic if "Lizard People" won the recount?)
In what may be the final official act of the Minnesota state election trail, judges will open the remaining 384 absentee ballots and tally the votes. Currently, Al Franken has a 226 vote lead, meaning that the remaining ballots would have to fall heavily in favor of Norm Coleman to change the projected outcome.

The ballots do come from areas that typically vote Republican. However, absentee voters often lean Democratic, and in any case, Coleman would have to get something like 306 out of the 384 votes, or nearly 80% of them. Highly doubtful.

If Franken is declared the victor by the court, Coleman has said he'll probably appeal to the Minnesota Supreme Court. But the state court's strict and unbiased adherence to Minnesota election laws will make it extremely unlikely for the appeal to be granted.

And, if the nightmare scenario continues, MN governor Tim Pawlenty and the Republican Secretary of State may refuse to certify the election until after all the final appeals are exhausted, which could run this well into the summer before it's resolved.

Besides Norm Coleman, the other big loser in the extended recount will be the entire population of Minnesota, who, because of Coleman's inability to concede defeat, have been without one of their two senators for over three months. In a time of economic hardship, leaving the state one senator short is deplorable. How many millions of stimulus dollars have the state left on the table because they lacked another voice in the Senate? No one can tell, but it doesn't take a genius to know that two senators acting on behalf of their home state would be more work than one.

The certification might not be needed after all. If Al Franken prevails after today's recount is completed, Senate Majority Leader Harry Reid has the option to seat Franken anyway, since a precedent was set when Illinois Senate Roland Burris was seated over the objections of the new governor and the Democratic Sec. of State.

(Of course, that would require Reid to make a gutsy decision, and I'm convinced the man possesses cotton candy for innards!)

In any case, you can watch the proceedings live via TheUptake.org, which will have streaming video starting at 10:30AM Eastern Time. BTW, The Uptake is doing some amazing work in bringing every minute of the proceedings live on the internet, so consider tossing them a small donation. Please use the donate button on the RIGHT-HAND column on the main page; the one on the left is for The Uptake Institute only.

And here's a video recap of the entire history of the election recount to bring you up to speed: