This isn't how the world ends...yet 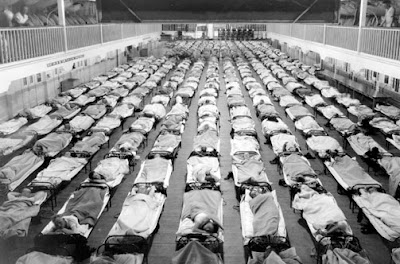 (1918 flu pandemic photo)
As pandemics go, the Swine Flu isn't going to be the end-all for us. Not yet, anyway. Despite what the media is screaming about on every channel 24 hours a day, this isn't going to be much worse than any of the other flu variants that have gone around for the last 50 years.

The running tally at last count was around 1,600 reported cases with roughly 100 deaths. Giving it a mortality rate of roughly 6%. Which, while nothing to sneeze at (lol), isn't exactly Ebola Zaire (about 90% mortality).

Of course, Ebola isn't spread nearly as easily as the swine influenza A (H1N1) virus, so the actual total number of deaths will probably still be horrific should the virus actually become a version of the 1918-19 so-called Spanish flu pandemic (type A influenza, H1N1 subtype), which may have killed anywhere from 20 to 100 million people worldwide. That seems very unlikely given the improved government response to this kind of thing these days.

Still, the media being what they are, we'll see nothing but swine flu stories leading off every broadcast for the next several weeks. I strongly recommend bookmarking the CDC (Center for Disease Control) website to get sober analysis of the outbreak. It'll help you sleep better, trust me.

This won't be the way the world ends just yet.

Now, if Ebola ever mutates and becomes transmittable through the the air and through casual contact, hoo-boy!
Posted by CT Bob at 4/27/2009 08:32:00 AM

I'm a bit late on this one, but here in Cairo the government has decided to kill every swine in the country. Of course they mean pigs and hogs. The total is something to the effect of 300,000. We have had Egyptian pork and it tastes like crap (at least the stuff we bought). So we bring our own over (COSTCO). Still, it's a bit of overkill.