I thought Three Mile Island was over 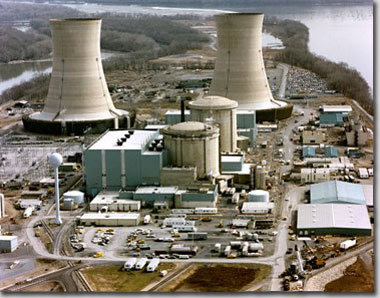 Here I was, all comfortable and fairly confident that the TMI accident was reasonably contained after I wrote my article about the disaster's 30th anniversary last week. Silly me.

So I should have known better than to click on a diary at Daily Kos entitled "Startling revelations on Three Mile Island & nuclear power".

There went all my comfort out the window! Sue Sturgis put together a convincing argument that the accident at TMI was much worse than the utility Metropolitan Edison and the Nuclear Regulatory Commission (NRC) led us to believe.

The author used anecdotal evidence and whistle-blower accounts, and even referred to intrigue and a Karen Silkwood-style murder in making her case. Here's a quote from the article about cancer deaths in the area surrounding TMI:

In 1984, for example, psychologist Marjorie Aamodt and her engineer husband, Norman -- owners of an organic dairy farm east of Three Mile Island who got involved in a lawsuit seeking to stop TMI from restarting its Unit 1 reactor -- surveyed residents in three hilltop neighborhoods near the plant. Dozens of neighbors reported a metallic taste, nausea, vomiting and hair loss as well as illnesses including cancers, skin and reproductive problems, and collapsed organs -- all associated with radiation exposure. Among the 450 people surveyed, there were 19 cancer deaths reported between 1980 and 1984 -- more than seven times what would be expected statistically.

And that was only those deaths that had occurred in the five years immediately after the accident. This chart shows the correspondence between radiation levels and cancer deaths in a longer term study, but even this is somewhat incomplete as it was conducted only 18 years (1997) after the disaster: 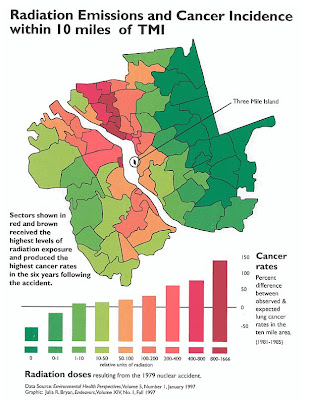 A longer term study that includes the thirty-year time-line would be a lot more enlightening. The evidence of a much more significant leak is very worrisome. The numbers far exceed government estimates, and indeed, on the upper reaches they nearly approach Chernobyl-like quantities of radiation released.

While this is somewhat far-fetched, you can't ignore the hundreds of out-of-court settlements with the disaster's victims by Metropolitan Edison that seems to indicate that there was a lot more radiation released than the "harmless" levels the utility and the NRC had claimed.

Read the article and click on the links, but don't hold me responsible if you have trouble sleeping tonight.