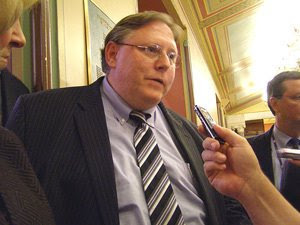 “The proposal announced today to completely eliminate our state’s newly adopted system of campaign financing, which was originally approved on a bipartisan basis, is the wrong thing to do and comes at a time when we should be encouraging more people to become involved in government.

“The funding for this program comes from unclaimed properties and is not a direct tax on citizens of this state.

“Through polling, phone calls and direct mail, the citizens of this state demanded reform to weed out corruption and the unfair monetary influence of special interests. Calling for its elimination is an affront to the need for a more open and accountable government.

“In the last election cycle, we saw more people have the opportunity to become involved in the process due to this program, especially during primaries. Without it, many average citizens who would like to enter government with fresh ideas and new approaches will not have this opportunity.

“Other states throughout the country now look towards Connecticut as a model for its system of clean elections.

“The call for its elimination comes on the eve of the 2010 election for governor. Apparently, some want to continue the system of incumbent protection that government has had for too long.”

There's absolutely no question that the Citizens’ Election Program levels the playing field among state candidates and pretty much eliminates the influence that special interest money often buys.

It also helps reduce the number of candidates running unopposed, which should rarely happen in a democracy, but the necessity of fund raising against an entrenched incumbent often shortchanged Connecticut voters of the opportunity to choose between two or more candidates for a seat.

Sure the program costs money, but it's not coming out of tax dollars. Besides, there's no larger cost to the taxpayers than bad leadership, or politicians who have been bought and paid-for by the special interests. That can cost the state BILLIONS!

ANYTHING that gets that tubbo worked up is worthwhile.