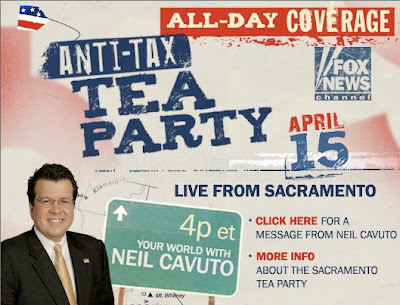 Q. When is a national news organization NOT behaving in a "fair and balanced" manner?

A. When they're Fox News, of course!

They've given up completely their weak-assed attempts to be a credible news organization with their obvious promotion of the so-called "grassroots" Tea Party movement. The graphic above (via Christy Harden Smith at FireDogLake) indicates Fox News has deserted their charade of journalism and simply become what we always knew it was: a conduit for astroturfing and GOP propaganda.

Meanwhile, isn't the vast majority of their so-called "grassroots" in line for the first substantial tax break in nearly a decade? Assuming this is a populist movement, that is.

Listen, nobody is a fan of taxes. But if this is a huge middle-class tax protest, where were these people for the last 8 years when Bush awarded the top 5% income earners with huge tax breaks while borrowing to finance a war he started on false pretenses? Didn't that upset them at all? Why are they just getting riled up NOW?

Because, there's no "they" there. This whole "Tea Party" thing is simply a corporate sham, counting on the brainwashed conservatives who have listened to Limbaugh, Hannity, and Cavuto long enough for the rational areas of their brains to rot away completely from lack of exercise. The few morons who are dumb enough to show up at these events will be those very same people who would suffer the most if we continued the Bush economic practices. If they still possessed cognitive functioning, they'd realize this on their own.

I can't wait to get the reports of numbers of protesters and to see the coverage. It is going to be fun to watch real reporters ask questions of the tea party goers like, "Who's tax rules do you think you are protesting?". I expect these protests are going to be a good laugh. Epic fail FOX news.

"The few morons who are dumb enough to show up at these events will be those very same people who would suffer the most if we continued the Bush economic practices. If they still possessed cognitive functioning, they'd realize this on their own."

It could be worse, those few dumb morons could be overweight, humorless milford trash with huge heads that are so bitter they couldn't figure out how to make a buck that they get angry when others won't voluntarily fork over the fruits of their labor. I hate to be mean spirited, but apparently the feeling is not mutual.

The bottom line is, in order to qualify as that "top 10% of income earners" - you need only be making 92K a year. At that income level, you are paying over 70% of the total tax burden in the nation. The bottom 60% of tax payers pay only 16% of the nations income tax burden, while controlling 26% of the wealth. The bottom 40% of taxpayers pay no income at all. Now, out of all of those people, who do you think require the most costly social service programs? Something tells me its that bottom 40% who are contributing nothing and getting a free ride. How many people making 92K a year do you really think have a whole lot of political influence and are getting sweatheart deals as a result? No, most of them are cutting back as well to make their mortgage payments and save for their living expenses too.

Don't get me wrong, I think a progressive tax system is okay, but your blog entry here is downright insulting to anyone who is tired of having a huge chunk of their paycheck stolen from them every week or two while others pay nothing and expect more. Its even worse in this state itself as our legislature is figuring out ways to tax us even more and borrow from our children's future to prop up a government that is unsustainable and wasteful.

Second of all, Fox may be promoting this tea party movement - but considering its one of the few mass media outlets not completely in the tank for Obama, maybe you shouldn't throw around accussations about "credibility" given your party is the primary benefactor of the slant. Every time I've logged into my homepage in the last week, I've seen coverage of Obamas friggin dog or how his credentials should no longer be questioned now that he "handled" the somali pirate situation.

In summary, try to bring a little class to your politics. Normally you do a better job, but the more you have gotten your way since the election, the less readable this site has become.

Get a sense of humor, teabag.

If they REALLY wanted to get our attention, they should throw Starbucks over the side of the ship.

WHB, at $4 a cup, tossing a Starbucks latte would be a statement! Maybe, I'll get a big cup and wait for it to start raining!

I don't like tea either and getting teabagged, well that's much worse.

I drove by Long Wharf this morning and there were quite a few teabaggers there. Of course, I couldn't help but think, "Why aren't these people working?"

Something tells me they aren't going to be paying any taxes on their time spent loafing about with cute signs.

I rode by Long Wharf this morning too in a VA bus to the West Haven VA hospital. This was all paid for by the good tax paying citizens of The United States, the most powerful country in the world.
If you want to feel good about that last statment plus having nice highways to drive on. Just shut the f--- up and pay your taxes. Lovingly--JC Sr