In the MGAT hotseat 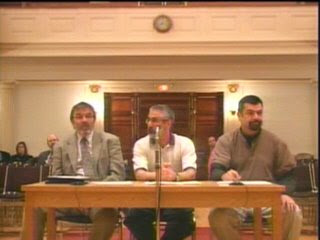 Last night the MGAT (Milford Government Access Television) Committee answered questions posed by the Board of Aldermen, as we were a (thankfully early) part of the Board's four-hour budget session. Committee Chairman Mike Manente, who along with Phil Kearney answered the questions; while I sat there, helpfully holding a pen like there might be something important going on in my head that I'd absolutely NEED to jot down in a hurry!

We're attempting to accomplish what the nearby Town of Orange, Connecticut does on less than 1/4 of their budget, even though THEY have only 25% of our population. If we ran similar numbers based on households per their funding, we'd need something in the vicinity of a quarter-million dollars to do what they do. ($65K x 4)

Suffice to say, Milford isn't going to give us a quarter-million bucks! Not this year, anyway. But we're getting to where we need to be on a tight shoestring, and I look forward to working with the city on making the process of government as transparent as possible.
Posted by CT Bob at 4/14/2009 12:08:00 PM

Bob on TV. Too much transparency in government.

It's only fitting that they put you on the LEFT.

EHP, we're in a region that covers 6 towns in the Cablevision area. They had a $100K grant to split between those towns. We're set to receive about 1/4 of that, but it's all earmarked for equipment upgrades. Our operating expenses and personnel costs are part of the city's budget, which is currently at $14K for the year.

Which really doesn't make sense when smaller towns with a smaller subscriber base has a much larger budget than us. But we only had the official committee in place since January, so we're still sorting out all our financing options.