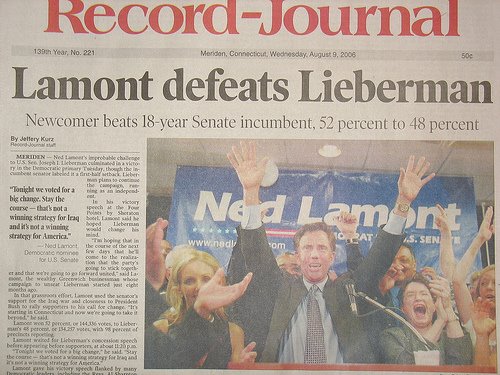 In my mind, and in my heart, the Eighth of August will always remain "Ned Lamont Day".

Since that day, our nation has seen many significant changes. Huge, dynamic, encompassing changes to the course of American history.

All of that can be indirectly traced back to an amazing, and seemingly quixotic run for Senate by some guy from Greenwich that nobody ever heard of:

Ned spoke of "change" long before Barack Obama adopted it for his campaign's theme. The very night he beat the oddsmakers and astounded the establishment by defeating a three-term Democratic senator in his own party's primary, Ned Lamont had this to say:

"They call Connecticut the land of steady habits...tonight we voted for a big change."

And Ned helped immensely in bringing about that change. Because of Ned's courage and selfless audacity, he influenced many people who became involved in the democratic process. He showed that it's possible to win against overwhelming odds, and that by sticking to your values, people will respect and support you.

It doesn't matter so much that he didn't eventually win that seat in the Senate. Ned has done so much to show that a person with a good understanding of the character of our nation and a recognition of our true potential can move mountains. It's likely that Ned's influence on the American psyche has paid off in many different ways.

At least in part, because of Ned we gained huge majorities in both houses of Congress. And likely because of Ned, we have a president who will actually lead our nation!

Because of Ned, we now know that anything is possible; and we thank him for doing everything he did. He was the "Yes We Can" guy well before Barack Obama.

UPDATE: A minute or so of pure joy, requested by Spazeboy!

Lest we forget....today is also the 35th anniversary of Nixon's resignation announcement.

Great post Bob. Remember your minute or so of pure joy video? You should add it to the post.

Nice video, it brought back memories ( I was there in that room too that morning). I'll always wonder if the grandson of Thomas W. Lamont would have done things any differently than the status quo we're stuck in now. Sure seemed a possibility then.

Yeah, it was a memorable event. I remember ending up in Branford Boy's suite around 1AM, sipping some fine single malt scotch with a bunch of bloggers and worrying about how hungover I was going to be in six hours when I had to go to work!