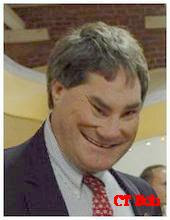 For the most part I've dismissed the colorful rants by State Republican Party Chairman Chris Healy as typically conservative, Limbaugh-influenced rhetoric, peppered with occasional lame attempts at humor. For the most part, he's resided well under my political radar. There's just too much going on these days to focus on such an insignificant player.

But as ATalbot pointed out yesterday on CT Local Politics, Healy has just crossed a line of decency that even many Republicans would recognize and condemn.

Three days after Sen. Chris Dodd announced that he was diagnosed with prostate cancer, Healy took the personal health crisis as an invitation to launch a political attack:

And then there will be rationing – lots of it. It is not cruel to say that if Sen. Chris Dodd were enrolled in a Canadian or English plan, he would probably not survive his diagnosis. Treatment would be delayed. Sen. Dodd certainly would not be able to schedule his surgery on his time table under the single-payer plan.

The unrestrained magnitude of offense contained in this paragraph has momentarily stunned me into a state of creative inertia! Fortunately for me, ATalbot has done an admirable job in countering Healy's callous remarks, thereby saving me the effort of writing something less effective. (Plus, I'm kind of lazy):

There is so much fundamentally wrong with this paragraph that it’s difficult to know where to start. Let’s look beyond the disgusting shot at Senator Dodd. First and most basically, there is not a debate on a single-payer plan. Perhaps Healy should address the bill that’s actually being debated. Second, Dodd is receiving health care through a public plan–that is, the plan that is offered to federal employees. Third, under the plan being debated particularly, the wait for emergency and medical treatment will be unchanged due to the same necessity-based triage system that already exists. Indeed, over time these wait times may in fact decrease due to widespread implementation of preventative care.

Healy’s words are more than tawdry, they’re absolutely wrong. And they reveal something fundamentally bankrupt about the Republican party on this issue. It’s about time for players in the Republican party to get serious on health care reform. It’s an issue that matters to an ever-growing number of American, including myself...

And not to pile on or anything, but obviously Blogger doesn't include a grammar- or spell-checker in the title line, because Healy named his screed "The Democrat's Parrallel Universe". But that's somewhat petty and mean-spirited of me to point out those deficiencies, when the fact remains that he's got so much more of execrable substance to go after!

I think it's better to let Chris Healy use his own words to describe himself. Specifically, one word: he uses the word "hack" as his "Occupation" in his Blogger profile, viewable here (until he changes it).

However, you know me...it shouldn't surprise anyone that I made a screen cap of his profile page for your viewing pleasure.

Sometimes the indisputable truth about a person can be summed up with a single word. And that word carries much more weight if the person in question uses it to describe himself. 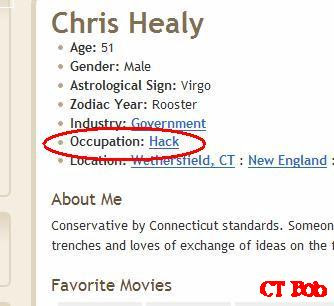 Numbers that would explain the huge difference in how many Americans that are actually even diagnosed with prostate cancer in comparison to Canada, never mind being diagnosed early enough for effective treatment.

Just doing the math on the per capita rates of being diagnosed with prostate cancer with your eyeballs there... Something fishy, eh?

In Canada men actually get a chance to get diagnosed for it and untold numbers of Americans needlessly die from prostate cancer (or prostate cancer related problems) without ever knowing or being treated for it.

Yeah, Healy is a hack and is completely full of shit.

And please note that the people that pay the price in the USA disproportionately are the ones that are most likely poor: The ones without health insurance.

Don't you think that Healy knew what he was doing when he put his occupation up as "hack"? Probably another attempt at his lame humor. Can't imagine he will take it down because you pointed it out.

"Many a true word is spoken in jest."