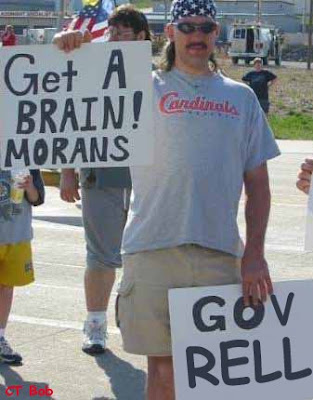 In fact, I think she's counting on it! That's the only conclusion I can arrive at with this new information.

Based on the news this week that Gov. Rell knew she wouldn't have the line item veto available to her by not signing the budget bill, she was hoping to take credit anyway for wanting to cut the budget, and appear as if she would have succeeded were it not for the interfering actions of Dick Blumenthal and his nit-picky enforcement of the laws!

CT Blogger explains the situation over at My Left Nutmeg:

So what we basically have here is a governor who, instead of adhering to her legal counsel's advice, opted to grandstand in front of the cameras, babble on and on about so-called "pork spending" (spending could have addressed IF she'd LISTEN to her legal counsel and signed the budget in the first place) in an feeble attempt to score political points.

The Hartford Courant has additional details on the story. It took a FOIA request to get the emails that show what she was up to.

Again Rell is nothing more than the dems fall guy. She and any thing she does is immaterial, they are a supermajority. They and they alone will have to answer for the budget they passed. Instead of the focus on Rell the Dems should be out extolling the virtues of the budget they passed. Oh yeah the less said about the budget the better. Rell's stupid little game won't spare the Dems the wrath if the CT economy really hits the skids over the next 2 years.

The supermajority, especially in the Senate, ain't exactly bulletproof. We all know having a governor who will sign bills into law that passed with a simple majority will get a heck of a lot more legislating done than a governor who needs to have her vetoes overrode, right?

And anyway, if the economy really hits the skids over the next two years, we're ALL, not just the Dems!

Apparently, this gentleman is of the opinion that the Moran family is in need of intelligence.

Doubtless, his companion has on a classic "I'm with STUPID t shirt...

Then I MUST ask, WHY OH WHY did the Connecticut voter elect JOE LIEBERMAN??????

This ISN'T a trick question, seeing as we are talking about a SENATE position here, you can' t blame it on a "region" issue.

In Washington State, we have one SCUMBAG congressman [Reichardt], but that's because HIS district includes Bainbridge Island & Bellevue, BOTH areas where the MOST STUPID people in Washington State live, and there is nothing we can do[that is legal anyway] to change that,,,,
Sooooo, tell me,,,Why did Connecticut vote Joe Lieberman into office?

Joe Lieberman pretended to be a moderate Democrat but lost the primary to Lamont anyway. So he went to the Republicans and said he'd be a good boy, and the local GOP decided not to back their own candidate. Only 1/3 of the Democrats voted for Lieberman, but something like 80% of the Republicans did, and Lieberman got something like $20 million in contributions from scumbag GOP fundraisers like Mel Sembler.

And we've been stuck with him ever since. Oh, and he's broken every single campaign promise he made in 2006.

Well that really sucks that Joe LIEberman was able to do that, I just found out that his PIECE OF $#iT wife has been receiving compensation from Breast Cancer charity "Susan G. Komen for the Cure" all the while her dirt bag hubby has been doing all he can to prevent these same victims from getting health care.

I can name you ONE charity that WILL not get ONE RED CENT from me [wanna guess which one?]

Even though I voted for OBAMA[like I REALLY had a choice after Kucinich got shoved aside, and Edwards bowed out], I WILL NOT vote for OBAMA in 2012.

I am hoping that this might be an opportune time for a REAL alternative.

With the IDIOT TEABAGGERS thrown in with their wild card[Sara FAILin?], which should FURTHER weaken and splinter the RepubliSCUM party, and the DemoRATS continueing to stab THEIR BASE in the back, I am hoping that this might open the door![Howard Dean?]

Seeing Obama kiss LIEberman's A$$ over WHATS LEFT of this $#itty health care bill was the LAST STRAW for me. "Status Quo" & "A$$ Kissing" was NOT the change I was looking for[Neither is WAR in Afghanistan, Amnesty for the Telecoms, Extension of the Patriot act, and refusal to Prosecute the Bush administration]