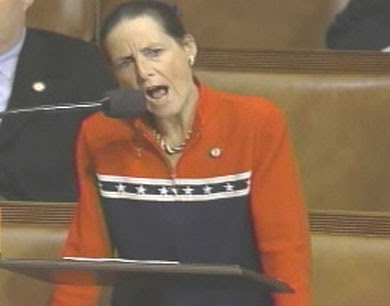 It's been a while since the "Crazy Old Lady of Capitol Hill", otherwise known as Rep. Jean Schmidt (OH-02) has provided a colorful sound bite, but that changed just yesterday when she appeared at a teabagger rally.

Video blogger supreme Mike Stark has been chasing down members of Congress and trying to get them to go on the record about health care. Stark, who was famously smacked down and wrestled out of an appearance by then-Senator George Allen of Virginia back in 2006 (which was probably avoidable had he been slightly more cagey with Allen's over-excitable goon squad) has become a leading vlogger of the health care reform movement.

In this video we can see Schmidt's staffers doing their best to shield their boss from the all-seeing camera eye. Spazeboy has a video where he encountered a similarly knuckleheaded staffer from Joe Lieberman's campaign at the memorable 2006 State Democratic Primary. Sadly, the video is apparently gone from Youtube. Anyway, it's very revealing when candidates have to be protected from embarrassing themselves with their own words.

Until the reps purge idiots like schmidt from their ranks, I as one just can't take them seriously. At least the dems when faced with their nuts like Cynthia Mckinny run viable candidates against them in their primaries. The reps have to once and for all disavow this truther nonsense and supporting those spreading lies about healthcare reform. This country for a long time will be a 52% - 48% majority nationally. Who gets the 52% will depend on many factors. But the reps seem to want to shine the light on their nutjobs and lets face it outright liars. This image will continue to obscure whatever good ideas they have.

Nonsense is nonsense, no matter how you say it. LOL!

And another thing about these idiot "birthers"...what if McCain had won? He was definitely born off of U.S. soil, in Panama, which currently isn't and has never been a state! Unlike Hawaii!

You just KNOW this is all political bullshit, because those douchey morons wouldn't have worried one little bit about McCain's birthplace if he'd won!