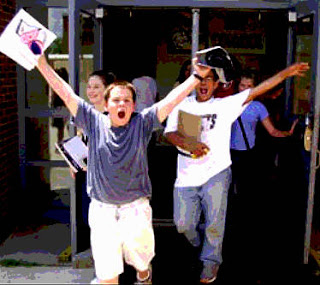 In a shocking turn of events this afternoon, every single Milford public school pupil has dropped out of school!

Evidence suggests the children, who were just denied the opportunity to watch President Obama's "Back To School" speech (including a stay-in-school message) by Milford's Superintendent of Schools Harvey B. Polansky, didn't understand that they should stay in school rather than quit.

As a result, every single Milford child has now dropped out, and they are currently roaming the streets causing a noisy ruckus.

We apologize for the error.

But really, was it absolutely necessary to politicize a talk from the President just because you don't agree with his politics? Has the partisan divide the conservatives are so feverishly working for finally reached this level? It's really getting silly.
Posted by CT Bob at 9/08/2009 03:25:00 PM

They'll be told what they need to know....and to heck with facts or truth!

When "W" was in office, I can't believe how many times I was told by the right thinking bullies "If you don't like it leave." They've been sounding more and more like commies these last few months than Stalin himself. If the redundanticans want this rift maybe they should start packing their bags and head off to Siberia.

Is that where the rascal showed up?

Heaven help Milford; it's a nicer town than to deserve that character.

ACR: Prehaps your will be different if a Republican President sends the same message to our kids, but Democratic parents force the Superintendant of Schools to block the speech (which is essentially the same as those I saw (on older technology, I'll grant you - I've got a few grey hairs now), from President Eisenhower, Kennedy, Johnson, Nixon, Ford, & Carter...

After that, I was in College...but I suppose President Reagan, Bush, Clinton, and Bush did the same.