"We Are Given Moments Historically" 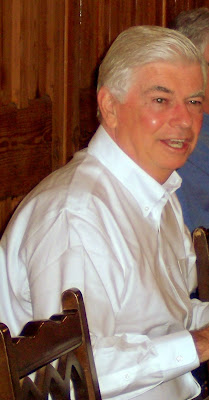 And with that, Senator Chris Dodd updated Connecticut bloggers on his legislative agenda at a meeting today in New Haven.

CTblogger and ConnecticutMan1 were there with their video camera. Here are the highlights on domestic issues. ConnecticutMan1 has a great post on Afghanistan:
Posted by Kirby at 9/26/2009 03:45:00 PM

What is your take on Merrick Alpert? He strikes me as a great candidate! What's not to like?

Merrick strikes me as a personable fellow and a reasonably earnest candidate. But his problem stems from having virtually no support at all from Democrats in Connecticut. I believe he entered the race thinking there was a strong anti-Dodd sentiment among Democrats similar to the 2006 race against Lieberman. There isn't. Not even close.

We're not willing to throw away Dodd's leadership and experience when he's been a million percent more consistent with Democratic ideals than Joe Lieberman was at the time (or continues to be, for that matter).

Merrick seems like a nice guy, but he has zero chance in this race, and if he wants to have a political future in Connecticut, he should consider dropping out and endorsing Dodd, and maybe running for a state House or Senate seat instead. Otherwise the only possible effect he'll have on the race is to funnel a scant few votes away from Dodd and perhaps keep them from going to the GOP candidate.

I'd give Merrick the benefit of the doubt on his motive, it's possible he thinks Dodd has dropped the ball on this banking thing and doesn't deserve reelection. I agree with you his support looks thin.

I understand the desire to remain loyal, but unless I'm misreading it, the Republicans are relishimg a run against Dodd. Can't say that about Merrick - he's a standup guy, former Air Force, had his own business, attractive family....central casting couldn't provide a better candidate.

Whatever happens, it'll be an interesting election, especially on the Republican side. It could be a fracas! :)

Dodd can really make a comeback, but I am still weary of him. I would forgive all his previous criticisms if he decides to co-sponsor SB 604, the billd to audit the Federal reserve. With 296 Congressmen and 31 US Senators already listed as co-sponsors of this bill you would think its a "no-brainer."

If Dodd agrees to Co-Sponsor SB 604 it will be clear that he is not "bought and paid for" by the big banks.

When I see his name on the list, I will jump on board helping him win next election. I really hope someone can get him to agree with the Fed Audit.

On a last note, the Fed just hired Enrons PR firm to dissuade Congress from doing the right thing. Please help Dodd make up his mind if any of you are close.

You posted over at Ctnewsjunkie that you are giving 10K to Schiff and now your here thinking you can bribe Sen Dodd with your support if only he does something you want.

I have video of the event going up as well. Kirby had some some great comments and questions.

Ct Keith I have not donated yet I am waiting to see what Dodd Does first. There is a long way to go on the US SEnate Race and my donation is limited by law

One last point, quit acting like a partisan "wanker" and just get word out that Dodd is not fooling any patriots until he co-sponsors sb 604.

Todays post is for you Dems. Visit www.mydailyblog.com I will be happy to e-mail you the full slate of photos if you wish.

There are alot of people I can get off Dodd's back if he just would "FUC%^G" co-sponsor SB 604.

What is he waiting for?

Direct link: to all others

The fact you think the teabaggers are having any effect on any decision Sen Dodd makes or ever will shows you're an idiot.

None of these wackjobs ever voted for a Democrat and certainly won't in the future.

The fact that you really believe that is scary. I am not going to tell you what to think or how to think.

I just dare you to come to a Tea Party, any Tea Party meet people and ask them if they are Democrats Independents or Republicans, you will find that these are ordinary Americans, people that could easily be your friends and neighbors.

The reason I know, is because the last event I attended was with several friends of mine all of whom were Democrats, except for five that were unaffiliated and two Republicans.

How many Tea Parties have you been to? When was the last time you polled a crowd and asked some simple “who are you” questions to get to the truth? No offence CtKeith but you really sound like a “saber rattler.”

For the Record Fox news and people like Glenn Beck would love to think that this is a right wing issue. Personally I despise Glenn Beck that false profit of Doom and his right wing news network. The Republicans were decimated by years of Bush corruption now they would like to take credit for the “Tea Party” movement that is mostly libertarian not Republican. Sorry, but the Republicans suck they blew it big time under Bush and they still continue to blow it when they have people like Rush Limbaugh and Anne Coulter demagogue their party.

As for the use of your term “Tea Bagger” Personally I think the term is a bigoted homophobic remark that is condescending to gay people everywhere.

I find it really troubling that on one hand, the Democrats embrace the gay movement and on the other you bash them when the appropriate euphuism props up. Personally I am not gay, but if I were, the term "Tea Bagger" would be like calling a black person the "N" word. There is no difference, and if your party represents such childish labels and insults you will find yourself a most unhappy man one day when you realize that you never stood for anything other than a person who divides and labels others.

Every time I read your stuff CtKeith I am disappointed, you sound more and more like "an agent provocateur." Who do you work for? And are you really happy?

If you're going to play this game,learn the Rules.

What you did on your website today is STEALING.You can't copy and paste entire posts of others on your blog.That's NOT fair use.

As for the teabaggers,the bigoted signs they allow at their little partys tells me exactly who and what they are.

You know, that occurred to me too...how come all the teabaggers accept the racist and bigoted signs that are displayed at these events without one iota of complaint.

Is it because they're worried about being cast as "libruls" if they take exception to the racism when a part of that rabble?