...and they didn't need to waterboard anyone 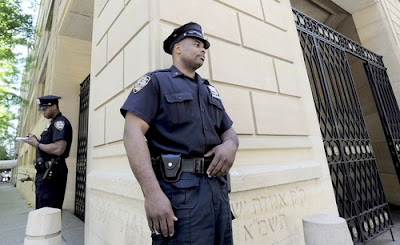 (Police guard a NYC synagogue after the exposure of the plot)
A case of homegrown terrorists was squashed this week by the FBI with the assistance of an informant. Four men from the Newburgh NY area were arrested outside a Bronx synagogue, where they had just left a fake bomb provided to them by an undercover FBI agent.

This is just one of many cases of homegrown terrorism that have been averted since 2001 by the use of systematic surveillance, informant networks, and the sheer incompetence of some of these "terrorists".

The four men were ex-convicts who envisioned themselves as holy warriors, ambitious enough to concoct a plot to blow up synagogues and military planes, authorities said.

But they were amateurs every step of the way. They had trouble finding guns and bought cameras at Wal-Mart to photograph their targets. One was a convicted purse snatcher, another smoked marijuana the day the plot was to be carried out.

Muslims fueled by hatred of America and Jews, they spent months scouting targets and securing what they thought was a surface-to-air missile system and powerful explosives -- all under the watch of an FBI informant.

Relatives said the defendants were down-on-their-luck men who worked at places like Wal-Mart, a landscaping company and a warehouse when they weren't behind bars. Payen's lawyer said he was "intellectually challenged" and on medication for schizophrenia. Marilyn Reader said he has "a very low borderline" IQ.

The point of this gets back to the argument that torture isn't necessary to get the information necessary to combat these planned terrorist attacks. Since 9/11 our intelligence network has expanded and become much more effective in exposing potential threats. Besides the fact that torture is illegal and it degrades our national character in the process.
Posted by CT Bob at 5/22/2009 07:14:00 AM

We get this just before Cheney's "checkers" speech?

I understand the "informant" supplied fake bombs for them to hold when they were arrested. Was this "informant' really a provocateur?

As Webster Tarpley says- "Synthetic Terror, made in the USA"

The "Quashed" vs. "Squashed" seems to be a debate requiring beer, which you have quit.

Not completely, Tessa. I had several Coronas last night after a physically punishing and brutal race. But I'm sure I worked them off by getting bashed around my boat.

After listening to Cheney, I needed a few drops of the restoring liquid myself.

This "debate" can be solved by simply indicting Dark Helmet II for crimes against humanity...and let him use that forum to persuade 12 of his peers of the validity of his viewpoints.

Let's clean up our own house.