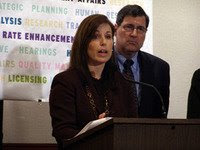 Sen. Gayle Slossberg (Christine Stuart file photo)
Christine Stuart from CT News Junkie reports from the State Capitol that the Senate Vacancy Bill was approved by the Senate 21-12. The bill, which provides for a special election rather than a direct appointment by the Governor in the event of a Senate vacancy, was divided along strict party lines.

Apparently, if you're a Connecticut Republican, it means you have to be against the voters of the state having the power to select a replacement senator, and instead you want a single person to make that decision.

Based on the Illinois governor's Senate replacement debacle, we all know how well THAT works! Not to mention that our LAST governor right here in the Nutmeg State did a stretch in PRISON because of his corruption!

The lines are clearly drawn in Connecticut, with the Democrats in favor of free and open elections, and the Republicans in favor of keeping their Senate hopes pinned on the blouse of one person, and one person only: Gov. Rowland Rell!
Posted by CT Bob at 5/29/2009 09:33:00 AM

What do you bet that if there were a Democratic governor and there were an impending Senate-appointment, the Republicans would be hurrying something like this bill along?