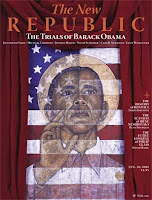 Apparently it's very difficult to find competent "reporter-researchers" these days.

In an article in The New Republic, the author takes an extremely condescending tone when referring to Sen. Chris Dodd's enlightened use of the internet in reaching out to his constituents.

Supposed high-brow publications love to make fun of the name "My Left Nutmeg", and they typically use that as a reason to disregard anything written there as nonsensical drivel. The New York Times actually refused to refer to the website by name back in 2006 (mustn't offend the reader's delicate sensibilities!), a policy that they eventually overcame.

So casual is TNR's dismissal of the community website that the author fails to do even the simplest search to back up her ridiculous claim.

Matt Browner-Hamlin discusses the situation is his blog Hold Fast:

Suzy Khimm is listed by The New Republic as a “reporter-researcher.” I haven’t yet waded through her three page article on Chris Dodd and his coming perilous reelection campaign to judge her overall ability as a reporter, but by the second paragraph it’s pretty easy to see that she’s not a researcher. Khimm writes:

Today, Dodd–five-term senator, established Washington powerbroker, the man whose “magnificent handshake,” The New York Times gushed two years ago, is “the grip of a pro, a … political pro, which he is”–has been reduced to shoring up his liberal bona fides by railing against credit card companies on a blog called My Left Nutmeg (motto: “Where Connecticut Dems Scratch That Progressive Itch”).

Senator Dodd’s first diary on My Left Nutmeg was on March 7, 2007, over two years ago. I know because at the time I was a front-page contributor and administrator of the site. I bumped his post from the diary section to the front page.

Read the rest of the article at Matt's blog.

Wow Suzy, you're quite the lousy researcher there! I can't really say much for the reporter part, either.

Obviously, Sen. Dodd hasn't be "reduced" to posting on MLN; rather, he's effectively used the medium of the internet to reach out to his constituents and his base, and we greatly appreciate that fact.

Maybe Suzy can ask Sen. Lieberman when he's going to get out of the stone age and reach out to those people in Connecticut whom he successfully railroaded into giving him a bonus six years in the greatest club in the world.

You up for it, Suze?

I know your blog said only politician minded people at the top. Frankly I'm just an auto mechanic who fixes Mercedes engines. But I want to learn more about politics and I agree strongly with your thoughts. I hope it's OK if I comment once in awhile. I'll wait until I feel a little more up to speed. But I sure do like reading your stuff.

Maybe if their name didn't have to do with itchie testicles TNR would have taken them more seriously.

You apparently have a sick, depraved mind. You AND that Suzy gal!

"My Left Nutmeg" is merely a reference to the left-leaning politics of many of the diarists there, and of course Connecticut is the Nutmeg State, so it all makes perfect sense!

What does that have to do with testicles? Sheesh! Get yer mind outta the gutter already!