Is it time for a nuclear option? 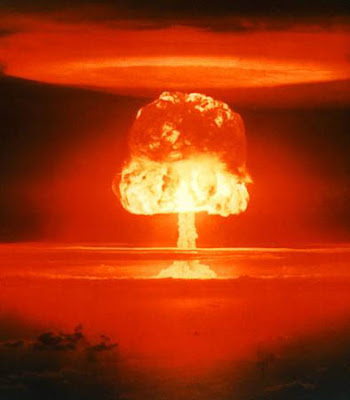 North Korea's recent nuclear test is extremely worrisome, that's for sure. Iran is ignoring international calls to stop it's nuclear program. Pakistan's shaky (nuclear-armed) government is increasingly being threatened with a fundamentalist takeover.

But that's not what I'm referring to here.

I'm talking about the threat from the GOP Senate minority against ANY Supreme Court nominee that President Obama proposes to fill the position of departing Justice David Souter, who announced he will retire at the end of the Court's session in June.

The President has interviewed two candidates as of late last week, and he also had the brazen audacity to mention this (from the AP):

"You have to have not only the intellect to be able to effectively apply the law to cases before you," Obama said in an interview carried Saturday on C-SPAN television. "But you have to be able to stand in somebody else's shoes and see through their eyes and get a sense of how the law might work or not work in practical day-to-day living."

Obama also has said he wants someone who employs empathy, "understanding and identifying with people's hopes and struggles," when arriving at decisions that could influence the nation for decades.

Senator Jon Kyl (R-AZ) has promised to lead a filibuster in the Senate if President Obama puts a candidate forward that shows any trace of human emotion:

Sen. Jon Kyl made clear he would use the procedural delay if Obama follows through on his pledge to nominate someone who takes into account human suffering and employs empathy from the bench.

Apparently, the only candidate that Sen. Kyl would find suitable would be someone who coldly decides cases based on simply the application of the law and not its potential impact on the people it affects.

Given the recent history of the Supreme Court and some of their decisions, I think it would be a benefit to us all to have a Justice use at least a tiny bit of empathy when making his or her decisions, rather than just mindlessly accept ideological dogma as their guide.

However, there IS one candidate who just might attain the requisite minimal level of human emotion and empathy that Sen. Kyl seeks: 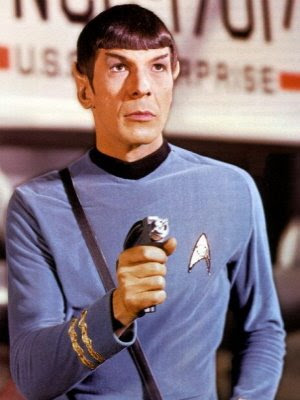 Does anyone remember the famous "Gang of Fourteen", the group of senators (including our own Joe Lieberman) who worked out the compromise that effectively stripped the minority Democrats of their power to filibuster Bush's lower court nominees under the threat that the GOP majority would change the Senate rules to disallow a super-majority to defeat them and simply make it a 50% plus one majority requirement to stop a filibuster? This was known as the "nuclear option".

As a result, the nation got stuck with tons of young, ultra-conservative judges who will infect the court system for decades with their rulings. And they will likely still be there when a Republican is back in the White House, just waiting to fill spots on the Supreme Court when they become available.

Now the Republicans are preemptively threatening to use that very same filibuster they wanted to get rid of to block the first nominee a Democrat will make since Bill Clinton was president.

Maybe the Democrats should dust off the old Republican scare tactic to whip some of them into line.

UPDATE: Right after I published this article, I turned on the TV and saw this - President Obama wants federal Judge Sonia Sotomayor to be his nominee for the U.S. Supreme Court. Let the fireworks begin!
Posted by CT Bob at 5/26/2009 08:43:00 AM

Uh....don't look now; but did you want to keep your firearms or not?

Actually ACR, even though I'm a legal gun owner and possess a current CT pistol permit, I feel guns should have stricter requirements and be a lot tougher to obtain.

I think waiting periods should be extended. I'd like to see stronger background checks and greater penalties for those who use guns in the commission of a crime. I think there should be an end to gun show sales, unless they can provide the same protections that a store dealer is responsible for.

And I think there should be limits on the types of guns available; nobody needs an assault rifle, unless they're shootin' wolves from a helicopter or sumthin'!

But I don't think the SC is gonna ever take the basic right to own guns away from us, despite what the NRA website would have you believe.

>>And I think there should be limits on the types of guns available; nobody needs an assault rifle, unless they're shootin' wolves from a helicopter or sumthin'!Nobody needs a Porsche either.

Vermont has no firearm laws of their own at all and has the lowest incidence of guns used in crimes in the nation.

So much for more regulations.

The Colt Sporter is widely used in competition. The Southington Police Rifle Team for example.

The majority of so called "assault rifles" are mechanically identical to other firearms with "pretty wooden" stocks.

No legally held (there's millions of them) full automatic has ever been used in a crime in the United States.
EverNever mind what we see on TV shows; those are fiction.

"...but did you want to keep your firearms or not?"

Perhaps SCOTUS should apply the same finely honed reasoning to the right to drive. It's clearlt unconstitutional to force citizens to have to go through all that training: let'em drive now!

(BTW, ACR---cherry-picking the words you like out of the Constitution is idiotic: how do you square open sales of semiautomatics with "A well-regulated militia"?)

>>A well-regulated militia?The militia *is* the citizens - NOT the Army and since it pre-dates the Nat'l Guard by around a century certainly not that either.


That's not opinion on my part that's the law:


The following are taken from the Oxford English Dictionary,
and bracket in time the writing of the 2nd amendment:

1709: "If a liberal Education has formed in us well-regulated
Appetites and worthy Inclinations."

1714: "The practice of all well-regulated courts of justice in the
world."

1812: "The equation of time ... is the adjustment of the difference of
time as shown by a well-regulated clock and a true sun
dial."

1848: "A remissness for which I am sure every well-regulated
person will blame the Mayor."

1862: "It appeared to her well-regulated mind, like a clandestine proceeding."

1894: "The newspaper, a never wanting adjunct to every well-regulated American embryo city."

The phrase "well-regulated" was in common use long before 1789, and remained so for a century thereafter. It referred to the property of something being in proper working order. Something that was well-regulated was calibrated correctly, functioning as expected. Establishing government oversight of the people's arms was not only not the intent in using the phrase in the 2nd amendment, it was precisely to render the government powerless to
do so that the founders wrote it.


Thus any perspective that the 2nd was intended to do anything less than protect the individual's right to keep and bear arms is intellectually dishonest.