If you're ever late with your payment for the water or electric bill, and your credit card interest rate suddenly zooms to 35.9% on your outstanding balance, you now have someone you can thank for it. 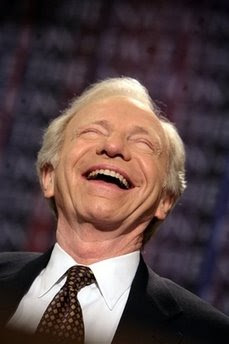 (Laughing all the way to the bank!)
In a procedural vote on capping credit card interest rates at 15%, Joe Lieberman sided with ALL the Republicans (save one, Sen. Chuck Grassley of Iowa), along with 20 Senate Democrats to easily defeat the amendment.

Sen. Chris Dodd supported the amendment and voted in favor of limiting those usurious and ridiculous penalties, commonly known as "universal default". This is a wicked practice that the deregulated banking industry uses to fleece borrowers of their money in the event of being late on nearly ANY bill, not simply their credit card payment.

Which means you can be diligent about paying your monthly vig (hey, if the banks are going to act like loan sharks, I'm going to use the nomenclature that fits), but if your gas bill is a week late, they can immediately smack you with the penalty rate; not only on new purchases, but also on your current balance even if you're in good standing!

While this amendment didn't address the practice, it would have lessened the financial squeeze that universal default puts upon borrowers. Usually the clause is hidden in the tiny print on that two or three page "terms & conditions" document that requires you be a financial wizard to decipher.

But good ol' Sen. Joe found yet another way to "stick it" to all those voters who didn't "stick with" him back in 2006. And, he also punished those who did, but in the parlance of government, they were unavoidable "collateral damage".

Now, I'm not gonna let those Democrats who voted against the amendment off the hook. Here's a list of the guilty parties:

Shame on you all.

But Bravo to Senator Bernie Sanders (VT) for introducing the measure, and for Chuck Grassley for having the balls to vote against the GOP obstructionists.
Posted by CT Bob at 5/15/2009 08:40:00 AM

Just say no to credit. Save your money and use it wisely. Reject the consumer based economy and live a life of peace with no worries about credit bills. Housing, clothes and food are the only things you need in life.

I agree, but the sad fact is that the banks manage to sucker people in with their low rates and minimal credit checks, and then sock it to 'em if they make even ONE mistake.

It's advisable to remain debt free, but the reality in our culture has been "buy now, pay later" for many decades. That ain't gonna change overnight, so in the meantime we should cheer for senators who actually are doing something to help the PEOPLE, not the banks.