Q-Poll results depend on the spin 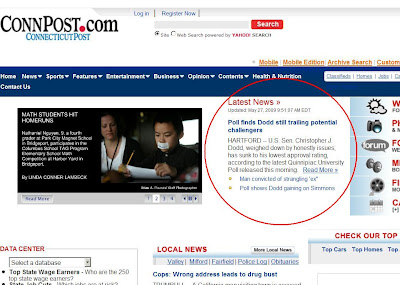 OK, so I just visited the Connecticut Post website (above) to get some info on the latest Quinnipiac Poll on the 2010 Connecticut Senate race.

And I saw there were two stories about the same poll that contains headlines which seemed to be at odds with each other (detail below). 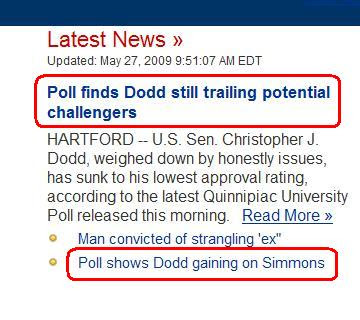 This first one, with the prominent headline, is Ken Dixon's article entitled:

Kind of scary, right? "ChallengerS" with an "S"...like, there's a whole slew of giant killers lined up to take a whack at the Senator. It kind of looks hopeless for Chris, just from the headline.

Then, just a little below that, is the Associated Press headline that accompanied the story over the national news wire:

Depending which of those two headlines you saw, what conclusions would you likely draw from each of them?

Additionally, there were two different quotes pulled for the two articles from Doug Schwartz, the perennial goblin of doom from the Q-Poll who rarely seems to say anything positive about candidates I like. The quote in Dixon's report reads like this:

"Sen. Christopher Dodd's numbers are getting better but they are still lousy," Schwartz said. "He still has high negatives: About half of the voters don't trust Dodd and disapprove of the job he is doing. And he is still behind Simmons in a general election match up." (all emphasis, and a sense of bewildered incredulity, is mine)

In the Associated Press story, this much more upbeat quote is displayed:

Pollster Doug Schwartz says Dodd, criticized for his involvement in the AIG bonus controversy and other issues, appears to have stopped the bleeding." (emphasis mine)

Hmmm...I dunno, but if I was a voter (well, I am actually) and I happened to read just the first article, I'd kind of assume that Dodd is toast.

But if the same hypothetical version of me only perused the SECOND article, I'd probably feel that good ol' Sen. Dodd was well on the way to regaining his popularity (especially in the wake of the successful credit card legislation signed into law), and I'd think that the Senator was going to make a strong campaign comeback.

Hey, I'm not saying that there's any kind of agenda or anything like that going on here, but still...

5/28 UPDATE: The headline on Ken Dixon's story about the Q-poll has been changed to "Dodd sees gains in recent poll" for this morning's online edition. I don't know what it says in the dead tree edition because, quite frankly, I prefer the New Haven Register, and that only on weekends, mostly for the flyers and the sports section (it's where I found Joyce's new kayak on sale).

So, today's headline more accurately represents the results of the poll, at least according to the consensus of other local news organizations.
Posted by CT Bob at 5/27/2009 11:59:00 AM