Primary challenger to Dodd will announce 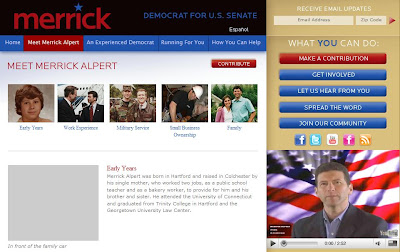 According to his website, lawyer & CEO Merrick Alpert intends to announce on Monday that he'll seek the Democratic nomination for Senate in the 2010 election.

Welcome. The website is up. The office is operational. The countdown starts! Today we inform the media of our plans. Tomorrow the journey begins. I look forward to sharing every step of this journey with you. This blog will be the ultimate behind the scenes look at the campaign. For a more casual view of the campaign, join me on facebook, twitter, and flickr to see up-to-date candid photos, daily on-the-road videos, and what really goes on at the ground level.

It'll be very interesting to see what Alpert brings to the table in a contest against the firmly established five-term incumbent Sen. Chris Dodd.

Tell us how you got the scoop on this unknown. Did you make up that name? Merrick Alpert? C'mon, tell us his real name.

Interesting candidate, impressive background. Nothing on his site about where he stands on issues, I guess there's plenty of time for that. Thanks for the heads up!

Well as a bridgeport voter i can say this guyseems nice but that doesnt cut it. I like Chris to. As of now i am split on my decision. I Think if he wins we might have the same problem with Lamont meaning he will not win a general so i say Vote for chris he is a safe choice.