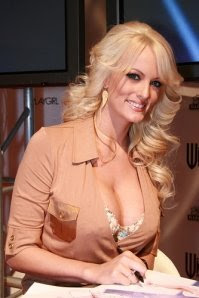 As I wrote back in February, she was the subject of a new website attempting to draft her into the race. Now she's seriously considering challenging Diaper Dave Vitter, the Republican senator with an alleged proclivity for hookers and infantilism.

She still hasn't committed to a party, so it will be interesting to see if she decides to seek the Democratic nomination, or will primary the Republican Vitter next year.

(Boy, anytime I want to see a spike in my hits, all I need to do is mention "Stormy Daniels"! Get ready for daily Stormy Daniels updates here on ConnecticutStormyBobDaniels.Com!)
Posted by CT Bob at 5/07/2009 11:36:00 AM

As friends and colleagues of Stormy, we're thrilled to see you "rise" to the occasion and use your "penetrating" commentary to keep your readers "a-breast" of her campaign. We know she hopes to assemble a party of "big tents," with the goal of seeing Vitter "go down," and your ongoing contribution to the cause will be crucial.

We're certain that your loyal readers will "bare" with you as you provide hourly updates on Stormy's "long, hard" campaign.

Be sure to tell your friends Hugh G. Rekshun and Mike Hunt!

What...blogging? No, I enjoy a good blogging three, maybe four times a week.

Hell, when I'm really in the mood, I'll blog two or three times in a single day!