How Many Jobs is That?

Yes, Bob is out in the glam world of making movies, as the rest of us toil in the trenches here. At least my trench has air conditioning.

Today, the Courant's Chris Keating has a lengthy piece on Dan Malloy's claim of creating 5,000 jobs as mayor of Stamford. While it is quite mind-numbing in spots, it is an important reminder of what goes into interpreting job numbers.
I don't have the answers to these questions, but the voters will be thinking about them when they cast their ballot in August and November. Or is it as simple as, "When my neighbor loses his job, it's a recession; when I lose my job, it's a depression." What do you think? 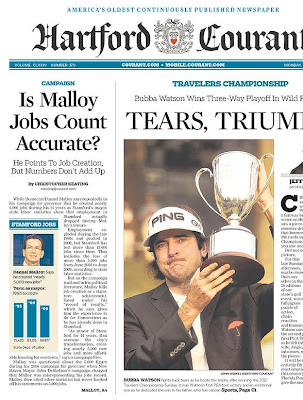 CT Bob Update: It may sound glam, but nobody told me that filmmaking was basically waiting around endlessly while sweating your balls off in the oppressive 90+ degree heat! But then, such is the price I gladly pay for following my muse.

Anyway, MattW has another article on the inflated Malloy jobs numbers over at My Left Nutmeg, and honestly, I'm getting a bit concerned about statements coming from the Malloy campaign that are blatantly misleading, such as the claim that Ned Lamont only entered the governor's race after Jodi Rell announced she would drop out.

In fact, Lamont announced his exploratory run for governor on November 4th. Rell announced she wouldn't seek another term on Nov. 9th, five days AFTER Lamont announced he was interested. The case can be made that Gov. Rell dropped out BECAUSE Lamont was interested in her office, and Rell didn't have the gumption for a serious challenge for her seat.

Funny how she didn't turn tail and run when Malloy announced HIS exploratory committee earlier.

Roy Occhiogrosso is the main strategist behind Malloy's campaign, and this is a guy who's strictly a hired gun; a hit man who doesn't care one bit about the quality of the candidates or the issues at hand. He's the guy who crafted many of the outrageous and false attacks on Ned Lamont back in 2006, when he worked for our junior senator, Joe Lieberman. What matters to him is who signs his checks, and he knows a win in the primary means more of those lovely paychecks. After 2006, we can only imagine how far he'll stoop to ensure victory for his new boss.

We're starting to see glimmers of his old nasty self in some of Dan Malloy's campaign propaganda. Let's hope saner and more civil minds will prevail, and maybe they'll stop attacking Ned and start talking about Dan's strengths (although, judging from the Courant article today, job creation doesn't seem to be one of them).
Posted by Kirby at 6/28/2010 01:58:00 PM

Thanks for the link, Kirby.

If you haven't seen mattw's take, check it out here.

Can somebody get word to the Malloy campaign that fratricide only helps the other side? It's time for him to defend his own record -- can't he do that without attacking another Democrat?

Yeah, because Ned's been a perfect angel...

Well Anonymous, maybe you can point out a single instance of Lamont stating something that is blatantly false about Dan Malloy. Because I sure haven't seen any.

so joe abbey and the scores of other consultants lamont is paying with his millions aren't in it for the money at all, right? just checking. they're in it for CT or course, and it's voters, who will have to wait until after Ned is elected to actually hear what he has to say since he's not going to the Garde on July 27.