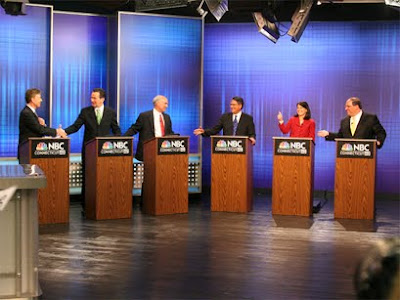 Colin McEnroe discusses the debate about debates within the Democratic race for governor in the Hartford Courant:

Pretty soon now, the 2010 candidates will start having debates, but right now they're in the phase of having debates about whether to have debates.

The person who most wants to have debates is Democratic gubernatorial candidate Dannel Malloy, who has challenged his immediate rival Ned Lamont to 17 debates around the state. Malloy also wants to debate Stephen Hawking, Fran Drescher, the Canadian rock band Rush and baseball commissioner Bud Selig.

Malloy is eager to debate because he has been running for governor since I was in middle school, so he knows the answers to more questions than Lamont. He is also trailing Lamont in some polls. When you're behind, you really want to debate, just on the off chance that your opponent will claim that Naugatuck is a failed Soviet state or answer most questions with a Roadrunner-like beep.

This was Lamont's thinking in 2006, when he asked for debates with Joe Lieberman. Lamont had no real debating experience. It was still worth a shot based on the slim hope that Lieberman would do something weird like stand there saying over and over, "Who is Ned Lamont. Who is he?" Which is what Lieberman did, almost as if he had awakened from a coma and was trying to bring himself up to date on the race. It didn't matter because nobody really watches debates. (there's more)

Click on the link to read the rest of Colin's hilarious article.