When Running for Senate, Past Irrelevant 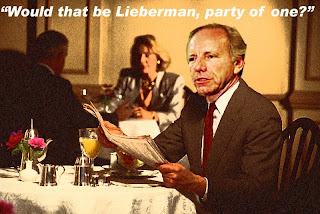 Our buddy, Joe has reached a new low -- if that is possible -- in this year's Senate race. The local TV reporters, mostly known as Joe's stenographers, asked him today if he would endorse a candidate. He first said, "I’m not ready to make choice…it’s possible I won’t get involved at all." But we know that Joe will never pass an opportunity by.

When it was pointed out that Joe first met Linda McMahon during his crusade against sex and violence aimed at children, which pretty much describes professional wrestling, this was his response,"She’s running for senate now so I’m not holding her accountable for anything in the past…"

This is all Scott Brown's fault. He stole Joe's relevance in D.C. The press there has no more interest in Joe, so he has to scrape around for something to get himself in the news. This is really sad. Oh, poor Joe. Ha ha ha.
Does Linda know about the curse Joe brings in Connecticut. He could make her even more unpopular.
oldswede

After I got over my surprise at Coakley for basically screwing the unscrewable pooch, the next thing I thought was, "Oh yeah, Lieberman is finally obsolete!" I hope the Democrats learned a lesson about how to deal with traitorous scum like Joseph.

President Obama hopefully knows now that when you pet a rabid dog, you shouldn't be shocked when he rips your hand open.

Yes, but when will state central wake up and smell the coffee?