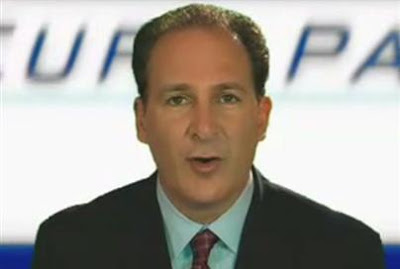 Proving that no hypocrisy is beyond your reach when you're a Republican, off-shore investment pitch man (and the guy who claims ALL the credit for predicting the entirely foreseeable economic downturn) Peter Schiff has hired an Arizona firm to help him get enough signatures to force a primary against wrestling diva Linda McSteroids.

Schiff, the bastard love child of an unholy alliance between the FreedomWorks-sponsored Tea Parties and disgruntled Connecticut conservatives (who, by the way, detest Linda M.), has spoken previously on the topic of pay-for-play issues.

After calling his Republican rival’s voter registration drive at the University of Connecticut “ACORN-ish,” Peter Schiff has just five days to collect 8,268 signatures to get on the Republican primary ballot and he’s paying to get it done.

While the Schiff campaign refused to confirm it was paying volunteers $2.25 per signature, it has admitted it’s hired an Arizona firm to help with its efforts.

Now, you can call me crazy, but if you're paying someone to collect signatures, doesn't that totally negate the meaning of the word "volunteer"? Hey, I guess that makes me a volunteer to the company I work for! I volunteer 40 hours of work a week to them. Sure, they give me cash every payday, but I'm still a volunteer, dammit. Very silly.

(Actually, the punchline to this little rant is that I just got laid off from my job, so now I'm technically an "unemployed volunteer". Do I have time to re-register as a Republican so I can start cashing in on those sweet $2.25 checks?)

There's also the little requirement that everyone collecting the signatures must not only be a GOPer, but also has to reside within the state. So if you see anyone collecting signatures that's obviously from Arizona (and you can easily tell who they are by the way they roughly challenge any Latinos they see and demand legal identification) please notify the Secretary of State's office.

The deadline is fast approaching, and if Schiff somehow turns in the required number of signatures, I wouldn't be surprised if a goodly portion of them don't stand up to close scrutiny.
Posted by CT Bob at 6/05/2010 08:16:00 AM

What McMahon was doing WAS Acornish, it was a voter registration drive. Schiff is trying to get on the ballot, a whole nother proposition.

And when you think of it, McMahon's tactic was technically LESS selfish than Schiff's, because registering people as Republicans means they are just as likely to vote for any GOP candidate as for her.

Whereas, Schiff's signatures ONLY benefit him (the selfish bastard!)

Actually, don't call the SOS office. I want Schiff on the primary ballot. Arizonan signature collectors welcome in my town!

CtBob, sounds a little bit like your afraid of what Peter Schiff might be able to accomplish. As far as him being able to predict the highly forseeable economic downturn, he did years before. The same cannot be said for many other people. Schiff is allowed to hire anybody he would like to collect signatures, whether he is paying them or not shouldn't make a difference, its not as if he had Acorn in his back pocket like our liberal president. They are also not registering fake names as acorn did. If you are calling the GOP hypocrytes, take a glance at your own party in the mirror, they had a bunch of scumbags collecting signatures, Schiff is merely trying to make his massive support known, not created.

I mean its not as if he stated he fought in the Vietnam War.

No, you're wrong Jay.

According to state statutes, Schiff can ONLY have CT residents who are registered Republicans gather signatures for him.

If an out of state person, paid or not, gathers signatures for a Connecticut ballot, ALL the signatures that person turns in will be disqualified.

It's a moot point Jay, since I'd bet dollars to donuts that Schiff won't have nearly enough signatures turned in by tomorrow's deadline to qualify.

But don't worry Jay, you can still invest in Schiff's non-American offshore funds....he'll continue to send American dollars to China and elsewhere, like a true great American patriot!

Ctbob, unless your driving an american car and buy only american everything, you are as much an american patriot as peter. You are right though, we will have to wait and see if he will be able to get the signatures. I am not a tea party go'er but I am a Republican and I would rather vote for Schiff than Mcmahon. On a side note,CTBOB, I am new to your blog, and although I'm a GOPer, I do enjoy it.

As a matter of fact Jay, my wife and I have ALWAYS and ONLY owned only American cars; I drive a Chevy wagon and my wife loves her Jeep Cherokee, which is a fact we proudly rub in the faces of GOPers that drive Nissans and other foreign SHITBOXES. So THERE!!! LOL!!!

Anyway Jay, welcome; I'm glad you enjoy the blog. I encourage you to take part in the somewhat intelligent discussion, as long as you have a sense of humor.

Looks like I might have got what I was hoping for,Schiff may have gotten alot more signatures than required to be on the ballot. I'm actually glad, I can't stand mcmahon.

Yeah, I think you're right. As long as Schiff's sigs stand up to close scrutiny, (and I think they will be checked) he's gonna make Linda McCrotchKick have to earn her wings.