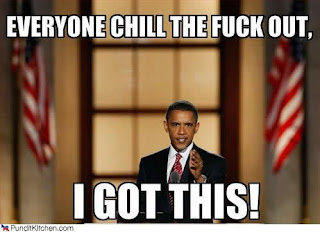 This is what Ed Schultz said at the top of his radio program this afternoon when the word came out that BP was not only putting up $20 billion in an escrow account, administered by a third party, but also $100 million in a fund for people who have been left unemployed by the moratorium on drilling. I look forward to hearing the backstory of today's meeting. I get the sense there was very little room in which BP could "negotiate" or try to roll this president.

I listened to that speech from the Oval Office last night, and I must say, I miss the rousing orator from the 2008 campaign. But, that's not governing. Doing the business of the nation can be dull and boring. But once again, just when we thought he was being too professorial, too cerebral, and not feeling enough of our pain, he quietly, precisely took aim and hit a bulls-eye.

When you think about all the crap that has been thrown his way and the booby-traps that no doubt still await this administration, we really do need to realize that he does have this. For the first time I can remember, we have a president who thinks about 18 steps ahead of today, and way ahead of his rivals and critics. He resists the urge to do things for show, and time after time, this cerebral, deliberative approach has worked.

While I don't agree with everything, I can at least respect his process and I trust his judgment. When he's pissing off the left and the right, he must be doing something right.
Posted by Kirby at 6/16/2010 07:29:00 PM

I was up at 3AM here in Cairo and maybe I'm in the minority, but I liked the speech. I liked the end. He's not god and this spill is out of his control. It appears that BP was criminally negligent. And after watching the 5 major oil company heads testify, it's pretty obvious they disagree with BP's methods, and take a much safer route, precisely because they have no way to contain a spill (better safe than sorry). There's a great article in Rolling Stone Magazine (available online:http://www.rollingstone.com/politics/news/17390/111965) about what a big oil find this was. Heads should roll for this whole mess, but knowing BP, they will probably promote those responsible and persecute those workers who warned them, as they have in the past. It's a corporate culture problem that stems directly from Tony Hayward's leadership.

The day after the Oval Office speech, Rachel Maddow gave us her version of the speech that Obama should have given. Rachel should be Obama's speech writer for these kind of issues.

On Thursday or Friday, can't remember, Rachel and a few other progressives were invited to a lunch at the White House. Don't think they talked about her speech but she has been doing steller work pointing out that oil cleanup technology has lagged behind oil drilling technology and it was done on purpose to serve greed. Another thing Obama could do is force ALL oil companies to fund a government sponsored program to search for new, better, and less toxic ways to clean up oil spills.