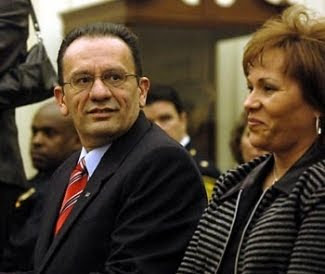 (Ken Krayeske photo via CTNJ)
Another "I'm Sticking With Joe" Democrat, Hartford Mayor Eddie Perez, is the latest victim of the "Liebercrat Curse!"

The Liebercrat Curse is when the divine forces of the universe, and all that is good and just triumph over the bull-headed and petty interests of cowardly Democrats, who actively went against their party to campaign for a certain self-serving career politician who shall remain nameless.

That very same career politician who then, just two years later, hit the road with the frantic zeal of a fundamentalist preacher on a meth binge to campaign for the REPUBLICAN nominee for president, John Sidney McCain!

How'd that sit with you Joe stickers?

We've seen many careers end in the wake of their "Stick With Joe" mentality, not the least of which was the Speaker of the House, my former district Rep. Jim Amann, who quit his powerful position as Speaker to make his doomed two-year run for governor. We all see how well THAT turned out.

Well, there goes another career! Mayor Perez claims he will resign after his conviction for larceny and bribery. He promises to appeal, but we all know where he's going.

To the Big House. The Joint. The Stir. The Pen. Just add a bunch of other lame 1940s movie cliches to belabor your point, Bob.

(Okay, I probably shouldn't type out what I say to myself in a blog post....I'll try to control that.)

Gee Eddie, how's that "I'm sticking with Joe" thing workin' out for ya? I didn't see your BFF Joe show up as a character witness professing his admiration for you at your trial. I wonder why?

I honestly try not to indulge in schadenfreude (mostly because I think too much celebrating over someone else's misfortune is tempting the Gods of Karma, who ARE real and will seriously fuck you up if you're not careful) but I just can't help it in this case!

Have fun in jail, Eddie! I'll order myself a vanity license plate just so you'll have something to do when you get there.

UPDATE: Okay, in the interest of journalistic accuracy, it isn't 100% certain that Perez will eventually go to jail, but excuse me for being pleased that a scumbag politician who got caught with his hand in the cookie jar is being punished for it. Any betrayal of the public trust should be prosecuted to the fullest extent of the law.
Posted by CT Bob at 6/18/2010 05:51:00 PM

As I read it, Eddie Perez is still mayor. It's more like he put himself on a leave of absence. Colin McEnroe has comments on this: He didn't resign
Resigning would be a symptom of having a conscience.
oldswede

Good point. I changed it from "resigned" to "claims he will resign" and linked the CT News Junkie article.

Basically he's toast any way he looks at it. He's just trying to get the most compensation out of the City of Hartford before his departure.

Hey, here in Milford we just paid off a naughty school superintendent who couldn't keep his hands off the lady principals something in the area of six figures to get him to go away quietly.

That school superintendent story was unreal. My wife works in education and she says that kind of arrogance is not as unusual as it should be. Some of these guys have a really obnoxious sense of entitlement.
I want to know where to get an employment contract like he had. Bet you do too.
oldswede

Well Liebercrat and then Lamont supporter ;). Maybe trying to undo the voodoo?

Either way I think it's great to see Perez go.I think it'll be better for Hartford in the long run. They need to put this behind them as quickly as possible.