Miles Davis, with John Coltrane, performs "So What" in a live concert video from April 1959. The album, "Kind of Blue", is a jazz milestone.

I was about three months old at the time, so I don't remember if I watched it. More than likely I was too busy shitting myself to pay attention to the TV. 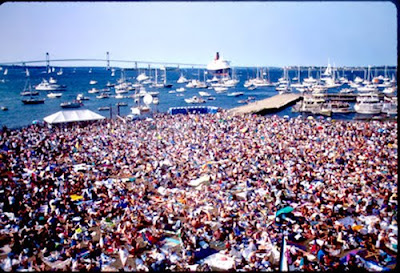 However, I did eventually see Miles Davis perform live, way back during the late 1980s at the Newport Jazz Festival. That's me in the front row. Miles was his usual aloof-acting self, seated on a stool facing away from the audience for most of the show. It didn't matter, because the music was fantastic.

...and I'm proud to say that this time around, I remained more or less continent!