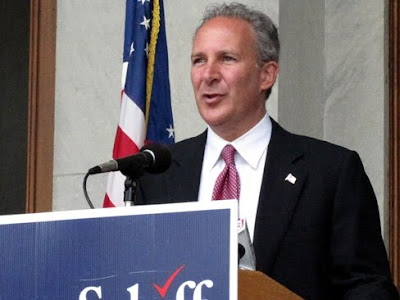 (Christine Stuart photo)
It looks like there will be a race for the GOP senate nomination in the August primary now that Peter Schiff has qualified with enough signatures to get on the ballot. And there's always a chance that Rob Simmons will jump back in the race if he feels there is enough division among the Republicans to get his numbers up, as he got enough votes at the convention to earn a place on the ballot but ceased campaign operations soon after due to money issues.

I think this is a good thing for the Democrats, since Schiff can now start attacking McMahon for not being tea-baggy enough; and McMahon will have to stretch farther to the right than she's comfortable with, putting her in unfamiliar territory where her chances of making a gigantic mistake increases exponentially.

And Simmons will probably see this discord within the party as an opportunity to relaunch his campaign and pull votes from both candidates.

It's entirely possible the GOP nomination will be won by a candidate with less than 40% of the vote; which is never an encouraging sign when you're up against a Democratic candidate with incredibly high approval numbers.

It will be fun. The Shiffheads are like the Naderites, but without their social skills and gracious acceptance of differing opinions.
oldswede

If ignorance is bliss, why are the teabaggers so angry?