Branford Boy over at My Left Nutmeg posted an article from The Philly Inquirer about Lieberman's desperate attempts to shore up support for his sagging campaign.

Here's part of the quote:

"In his effort to avoid being beaten or embarrassed, Lieberman has been busy dialing for allies. For instance, on St. Patrick's Day, a local Democrat named John McNamara answered his cell and discovered Lieberman on the line. McNamara, who works at a Hartford college, has chaired the party in New Britain since 1993, yet Lieberman had never called him, because Lieberman had never needed him - until now.

"The call didn't go well. McNamara told Lieberman that the war was a "damn mess," and that he, Lieberman, had given Bush a blank check. As McNamara now recounts the conversation: "I said that if it wasn't for Lamont, we would not be having this discussion. I can't imagine he agreed with that, because guys like him generally want a free ride, don't they? Anyway, he asked for my support. I couldn't give it."

Well, I happen to know that Lieberman DIDN'T give Bush a blank check after all...he in fact helpfully filled in the blanks, to the tune of $300 BILLION DOLLARS. And as you can see, the checkbook is brand new (check number 102), and there's plenty more checks where that came from. 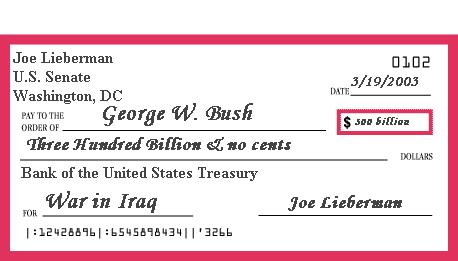 Let's take the checkbook away from Joe Lieberman before he wastes any more of our money...not to mention thousands of lives, America's prestige, and any good karma we've managed to accumulate in the last 230 years.

(As an aside, I was sorely tempted to edit the image to read "Three Hundred Billion & no SENSE", but as a rule I try to avoid puns unless absolutely necessary...)

(...of course, by posting that comment, I ended up including the pun anyway...)

Joe has also been pimping for war with Iran. Burning out those gas turbines must be doing wonders for United Technologies' bottom line.

I think we might still have enough time to avoid a war with Iran. Smart move for their leader (is he considered a President? I don't know how you can have a real president in a theocracy, because anything you do can be overruled by the head clerics) to write that letter to Bush.

Then again, some can argue that WE have a President in name only, too...

Projects..Projects..Projects.. If you are like me it seems like there is never enough time in the day.. You get home late and leave early.. then the weekends thats another story by itself. My wife has found it easier to hire somebody if you we need help with remodeling ideas. She fond a great site for remodeling ideas at http://remodelinghelp4u.com and wanted to share it with you.. Im glad to find help when I need it..