Some early convention frame caps, sort of to catch the ambience of the event. 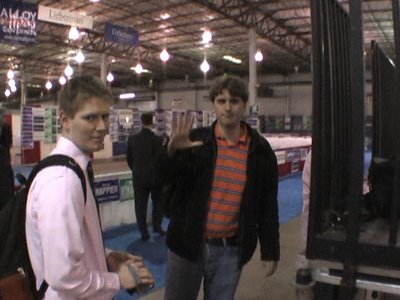 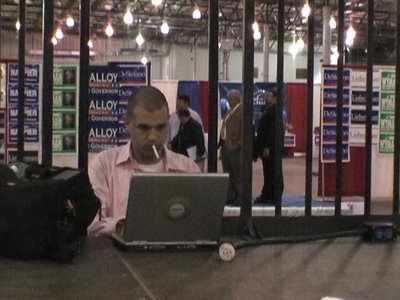 Lamont-campaign blogmeister Tim Tagaris apparently regrets the CT Expo's No Smoking policy while connecting to the Net for some live blogging. 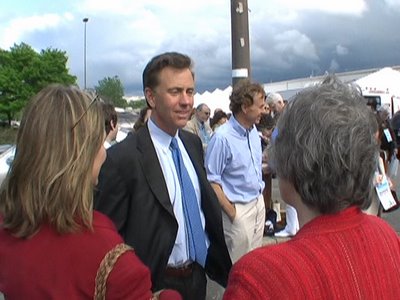 Ned arrives and greets his supporters, while the skies begin clearing for the first time in a very rainy week. The metaphors presented themselves with remarkable prescience. 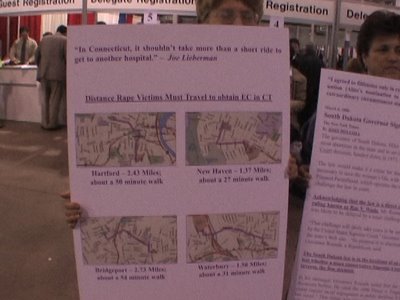 N.O.W. representing at the Convention with the "Joe's maps" posters that have become so "NETorious" (I just coined that word). I wonder how Senator Lieberman feels each time he sees a picture of the maps. Probably not nearly as bad as an assault victim who is denied treatment at a Connecticut hospital.

More later, plus video. And I just ordered a 250MB external firewire drive; my notebook only has a 40GB disk, and I had to delete all my episodes of "The Sopranos" in order to make enough room...believe me, it was a difficult decision, but no sacrifice is too great for the cause.

The Vito murder was just brutal. What an amazing season...

Uhh...I haven't watched that episode yet...

OK, I just watched it. You didn't really ruin it for me, I knew Vito was gonna get whacked sooner or later.

Best line of the show - Phil comforting his sister after Vito died:

GODDAMMIT! I HAVEN'T WATCHED THAT ONE YET!

Again, 'twas bound to happen, but no more Sopranos spoilers! :)

Great post, as always. For the record, the cigarette was unlit; I just needed one at that moment and pulled a Sammy Farha (for those familiar). =)

"...I just needed one at that moment and pulled a Sammy Farha..."

At least you're ALL IN on the Lamont campaign. :)

Nice! Where you get this guestbook? I want the same script.. Awesome content. thankyou.
»

What a great site, how do you build such a cool site, its excellent.
»