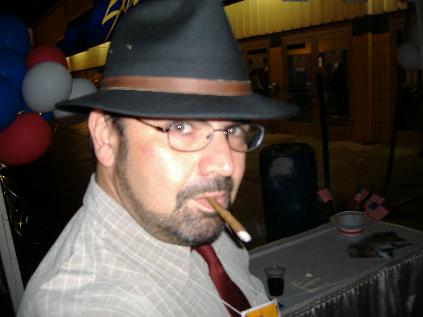 This is me after the convention concluded with the wonderful showing by Ned, enjoying a cigar and a brewski in the De Stefano For Governor tent. About 1/2 hour after this self-portrait was shot, I ended up at a North End cajun restaurant for the after-party (how fucking cool is it that Ned's campaign selected a funky, hip-hop, full-of-soul restaurant for the after-convention party?)

Lamont had the smallest tent compared to the big buck campaigns of Lieberman, Malloy and De Stefano, but after an informal poll I took of the delegates, Ned's tent rated the BEST free food of the convention! I was mistakenly advised that Lieberman was serving sushi, when in fact it was burgers and booze they were pushing on their reluctant constituents. Guess those lame-o slap sticks ate into their catering budget. Ned served mighty fine cajun food. Tasty and messy....mmm-mmm-good!

And De Stefano's campaign had the busiest bar and best music by FAR, but we all know us Italians are great when it comes to throwing a party.

I'll post more tomorrow, as it's coming up on 1AM and I have to be back in Hartford at 9 for the rest of the conventions, and it's about an hour away, so I'm gonna go to sleep.

Thirty three and a frickin-third percent! Yowsa! As someone mentioned over on FireDogLake earlier tonight, Lieberman must be shitting string right about now.
Posted by CT Bob at 5/20/2006 12:34:00 AM

Bob, I am so, so proud of everyone. Thanks for the good works & Go Ned! Wooo Hooo!

Thanks mui! It's now 7AM and I'm getting ready to head back up there for the 2nd day of the convention. My voice is shot and I'm operating on 5 hours sleep; I'll be glad when today is over!

Thanks for all the hard work Bob,

The bell has been rung and we bloodied his nose, the fight is on now.

bob, you're a nutmeg wonder. Love that hat! Keep up the good work. Let's set Joe adrift in his own mess. He represents the worst we have in DC: a Bush democrat! Remember, he helped turn Congressional oversite into Ye Ole Rubber Stamp. Do you have a favorite nickname for Joe? Firedoglake is using Gurney Joe.
Thanks again from us folks out here in California (via Connecticut)

PS
You list yourself, among many things, as a film maker. Any clips available?

Just sent this to the Lieberman backing Democratic Leadership Committee (DLC). My support will be for Ned Lamont not Senator Lieberman as for why, Senator Lieberman has failed in moving forward any of the Democratic party agenda, and when his vote was needed he more often than not sided with the opposition. Also he has failed to preform his duty he has not provided or made a serious call for oversight of the Bush administartion's policies. This is a duty as a constitutional officer it's what he swore to do to uphold the constitution, well Senator Lieberman has been little more than a sellout giving lip service, while selling his vote to the opposition. Also when asked if he would support the who ever won a primary for the democrat nomination he was not forth coming as a democrat, he evaded the question and made comments to suggest if he didn't win the primary he would run as an independent, this should have cut off any support you have for Senator Lieberman but if you wish to back a traitor to our party then thats your choice, you live with Senator Loserman I want something better for my daughter.

This is the best news I've woken up to since getting involved in 2001.

Thanks for all your hard work.
There is a shining ray of hope for this country, at last.

Thanks for giving us the insider's view.

I'm curious about how the delegates voted AFTER Ned received that requisite 15% to force a primary...beyond just the final result of 33%, that is.

I've read that some delegates (after Ned got 15%) voted for Holy Joe to more or less cover their ass from any retribution.

Could you maybe investigate that aspect for us?

I wonder what the final split might have been if ballots had been submitted en masse & then counted...or SECRET?

Thanks again for doing journeyman's work to keep us out-of-staters informed!

I am very relieved that people in CT are waking up to the sham show called holy joe lierberman....I live in the state just above you where we do not have a turncoat senator like hjl...although we do have a "pretty boy" gov who wants to be a "pretty boy" prez...yeah, fat chance...he'll see Brigham Young before he is elected prez!!

jt, my other blog futuredv.com details my attempts at filmmaking.