"Crashing the Gate" in New Haven

Spent another day on the campaign trail (as it were), visiting with Jerome and Markos, authors of the definitive book on how to take back the Democratic Party, "Crashing The Gate". They were hosted for a book signing at the Playwright Pub in New Haven by Branford Boy of "My Left Nutmeg" and Democracy For America - New Haven.

Markos and Jerome signed my book and posed for this picture: 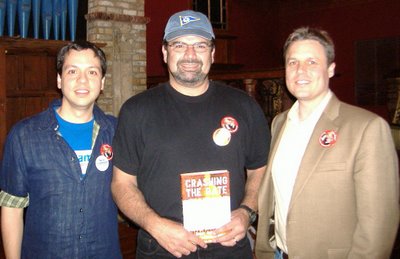 Later on, after Ned Lamont spoke and a few beers were consumed, nearly all the bloggers got together for a "team" picture with Ned, Markos, and Jerome. 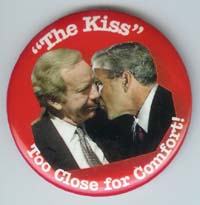 UPDATE: Notice in the picture above that we're all wearing our "The Kiss" buttons! 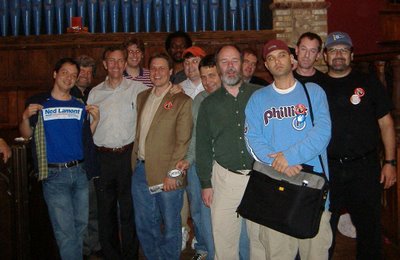 Do you see anything wrong with this picture? Yeah, where are all the girls at? Ladies, we need YOU to be blogging, too! Ned's campaign is all about inclusion, so get involved and start up a blog. Trust me, it's fun!
Posted by CT Bob at 5/21/2006 08:21:00 PM

The guy in the back looks like Tom Swan. Also, you meant DeanFan84 in the middle there. It was a fun event, though I didn't get to meet you.

Hey Mike, yeah sorry I didn't meet you. You're right on both counts; I met Tom for the first time tonight, and it usually takes me a few times to get someone's name to go with the face. Thanks.

Also just realized you should have Kos rather than Jerome on the left. :)

Congrats everyone. Regardless of August's outcome, we have done a fantastic job of holding a chief war-hawk accountable!

we're following you here in texas. amazing what real people with real hearts can do. yay ned!!!

I wish I had been able to be there! (I met you at Ned's happy hour fundraiser in Norwalk on the day of petition training...)

Marion, thank you for the nice thoughts.

Maura, alright NOW I know where the name Maura in VA came from...I'm seen your posts in other blogs, too. Nice ta meetcha!

hold on to those buttons because they're going to be worth a fortune in a few years.

Hey CT Keith, I can't find your email address anywhere; email it to me so I can send you your Kos & Jerome picture!

Looking for US.... If you are like me it seems like there is never enough time in the day.. You get home late and leave early.. then the weekends thats another story by itself. My wife has found it easier to hire somebody if you we need help with remodeling ideas. She fond a great site for remodeling ideas at http://remodelinghelp4u.com and wanted to share it with you.. Im glad to find help when I need it.. I hope you have great luck remodeling your home...