I think I just got an education in the power of blogging to reach people. 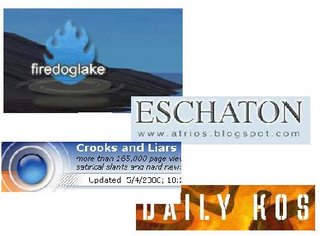 What started out yesterday as a snarky little rant about Joe Lieberman's asinine comments about emergency contraception has snowballed into a national forum for people to vent their anger.

I'm astounded at the visceral response I've seen directed at Joe Lieberman via the comments sections on various blogs around the nation. There are a LOT of people who are righteously pissed at what's going on in this country.

And that righteous anger will become the catalyst for change.

The recent polls on the Lieberman-Lamont race have been a bit discouraging. Some people who saw those numbers got a feeling that while we're doing our best for a noble cause, we can't possibly win.

The fact of the matter is that, so far, only Lieberman has been seen by the majority of voters out there. Lamont has very little name recognition. And when he does get mentioned by the local media, he's often referred to as "Greenwich businessman Ned Lamont".

Heh heh, yeah...not exactly the type of characterization that will engender a shitload of support.

This is all about to change.

With the recent hirings of media-consultant Bill Hillsman and Internet-coordinator Tim Tagaris, and with the state Democratic convention just 14 days away, the Lamont campaign is about to go into hyper-drive. After the May 19th convention, when Lamont has gotten enough delegates to force the primary (August 8th), we'll all be hearing a LOT more about Ned. Once the people see and hear him speak, they'll be convinced he's the man for the job.

And all that righteous anger out there, bubbling just below the surface, will erupt into massive support for Lamont. Because people have had all they're going to take.

The revolution has begun.

And, after you donate to Ned, please visit:

Don't forget about the local bloggers who are on the front lines.

I just came here via firedoglake(I reside in Massachusetts)it is great to hear from guys like you out there! Great work!

(Do take some time off to watch the Derby tommorrow, though.

CTBlogger, absolutely; we're all in this together (especially now that I'm on their radar screens!)

Chadwick, gotta do a little blogging today, but I this weekend I'll be getting my boat ready for the season. I'll try to catch the Derby on TV; I've wanted to go to a Derby ever since Hunter S. Thompson wrote about it!

Hunter S. Thompson is a god, and (along with Muhammad Ali) a son of the city we're immensely proud of.

Derby is a crazy time here in the River City, but well worth it. Weeks of shows, fireworks, and festivals. Our Bluegrass Brewing Company makes an incredible Bourbon Barrel Stout, and the Wild Turkey flows like water this weekend.

Come on down some year, if you get the notion.

I found the Gannon likes Lieberman comment on Lamont's blog. I sent a 'heads up' to AmericaBlog, who posted it.
Next thing I know, PatriotBoy-Jesus General had a graphic - which was picked up by Firedoglake.
It's a crazy world.

Are you sure all this traffic isn't from your mention on Air America last week? :)

ctblogger and spazeboy - credit and links are now posted. You guys rock!