Have you seen Lieberman's latest commercial yet?

Well, we now know where Joe stands on the issue of dignity in a campaign. You might guess that a three-term Democratic senator wouldn't feel it's OK to stoop to such a Rovian-type sleazy campaign commercial. Guess again. 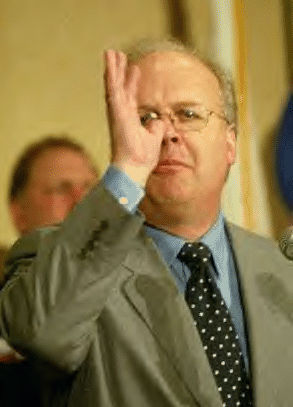 Obviously, Joe's ambitious, grasping need to remain in the U.S. Senate has obliterated any sense of shame the man may have once possessed. It's sad to see; at one time I did support Lieberman and agree with many of his policies. But something terrible must have happened to his soul in the last six years, because now he's become a sad, desperate little man.

The commercial itself is a pathetic attempt to impune Ned Lamont's character and record. I watched it several times, and while I do grudgingly admire it's "Hillsman-esque" presentation, the message is just plain wrong. (I happen to know for a fact that Ned Lamont does not force-feed asbestos to babies while raising their parent's health-care costs.)

And then I noticed something else. If you watch carefully, there is a lot of subliminal positioning going on. I think that the ad people either weren't aware of it, or maybe (far-fetched) they themselves are putting in a secret little message.

Here's what I mean: 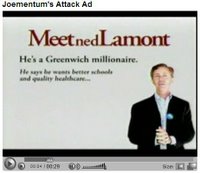 The commercial starts with Ned Lamont on the RIGHT side of the screen. The RIGHT is, of course, closely associated with Republican and neo-con "ideals". Hmmmm... 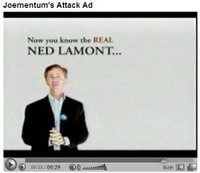 Then as it progresses, Lamont shifts over to the LEFT side of the screen, the true DEMOCRATIC and Progressive side. I thought that, in and of itself, this was quite interesting (in a tin-foil hat wearin' sorta way). 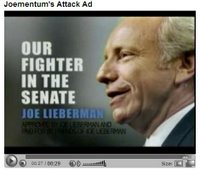 But then the Lamont image faded, and in comes Lieberman, proudly embellishing the RIGHT SIDE OF THE SCREEN (where he most definitely belongs and proudly identifies himself with), while his nasally voice-over is saying "I'm Joe Lieberman and I endorsed this ad!"

I wonder if that's ALL you're saying, Joe?

(And thanks are due to Spazeboy for endlessly watching Tivo to find the commercial; you might be one of the few people who have ever used Tivo to actually WATCH the commercials!)
Posted by CT Bob at 5/30/2006 11:04:00 AM

I agree. Lieberman's ad was a terrible ad. Any moral, upright person should be ashamed of themselves for creating such an ad. Heck I felt ashamed just watching Lieberman's ad, and not for Ned. Ned rocks!
BTW someone on FDL read Lieberman's book and said that he complains of *Weicker* making unfair attacks. I thought it was the other way around: Lieberman attacked Weicker. But what do I know.

No, what Lieberman wrote in his book was that it was unfair of Weicker to use votes that Joe made 17 years earlier in a negative ad.

Then, when it suits him, Joe jumps right on the mudslinging bandwagon, and pulls the same shit on Lamont. Or tries to, anyway.

Your are Nice. And so is your site! Maybe you need some more pictures. Will return in the near future.
»