Another loser gets his photo taken 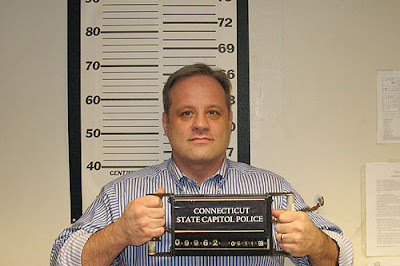 ...by the Connecticut State Police, that is.

Right-wing blogger/internet talker Hal Turner was arrested on a felony count of inciting injury to person or property for his words that allegedly encouraged people to "take up arms" against several state lawmakers, who he referred to as "the tyranny".

Turner, an alleged anti-Semite and white supremacist, was apparently angered by proposed legislation that would have forced Roman Catholic Church governors to be more accountable to their lay people.

The murder of Dr. George Tiller in his Wichita, Kansas church is a prime example of what happens when the hate speech of the far right is allowed to go unchecked. Even GOP Vice Presidential candidate Sarah Palin seems to have given her tacit approval for the violence against doctors practicing a legal and necessary procedure when she refused to consider the act of bombing abortion clinics "terrorism".

From an article about an interview with Palin on MSNBC last September:

Palin resisted the suggestion that if (former Weatherman William) Ayers was a “domestic terrorist” — a standard line in her campaign addresses — then so were conservative religious activists who bombed abortion clinics.

“I don’t know if you’re going to use the word ‘terrorist’ there,” she said.

So let's recap: bombing an ROTC building is terrorism; bombing abortion clinics is something less serious...perhaps a prank gone wrong, or a stern complaint over poor service or something like that.

I don't dispute the fact that bombing an ROTC building is indeed terrorism, but I equally conclude that bombing an abortion clinic falls unequivocally within the definition of terrorism also.

Sarah Palin, like too many far-right figures, don't seem to come to that same conclusion.

And, for the record, Ayers was never prosecuted for any Weather Underground activities.

Just yesterday, a security guard paid with his life to protect people in the U.S. Holocaust Memorial Museum, when an 88-year-old white supremacist who stepped into the museum with a rifle and began firing.

Unrestrained hate speech that specifically targets individuals or groups for violence does not fall under the First Amendment protections in the Constitution. Just as someone yelling "Fire" in a crowded movie theater is committing a crime (unless the theater in question is actually ON fire, in which case the person would be a hero), they don't have the right to encourage violence upon those they disagree with philosophically.

As a blogger, I'm very aware of the personal responsibility I have for the words I write. I occasionally agonize over the wording of a particular thought, especially when the issue is emotionally charged. But I'm cognizant of the fact that even certain colorful metaphors can be taken the wrong way, and I tend to err on the side of restraint when I feel I'm getting too close to the line.

Of course, I take significantly less pains in regard to moderating taste, foul language, and sophomoric observations...but I guess that's my personal cross to bear!
Posted by CT Bob at 6/11/2009 03:22:00 PM

Sadly there are those who claim his 1st amendment rights are being violated. Palin's stance is what has come to be the norm for all extremists regardless of what "wing" they represent. There is a built in mindset that cannot see evil in the actions of those who do criminal acts in support of a cause they believe in. As a reader of many diverse blogs and news sites, I find appalling the lunacy that right and left wing psychos post to support their insanity. I wish we could just somehow make them sane.

I agree. Sanity apparently is in short supply these days, and extremists of all kinds are multiplying like rats, both on the internet and the MSM. It seems that as times get tougher, people tend to latch onto more extreme ideas. It's somewhat discouraging, since we should all strive to find workable solutions.

Hmmm... why not the same charges against Congressman Murtha for calling troops cold-blooded murderers, as he has a lot more clout than some blogger. Or Dick Durbin likening our troops to Nazis. Speech like that could cause someone to go shoot up a recruitment center or something. That's terrorism as well, but I didn't see any news outlets regarding it as such.