Peter Schiff: proud to be a non-voter 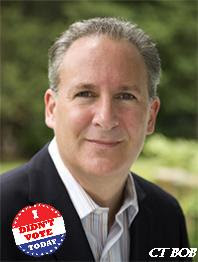 Peter Schiff, another possible Republican challenger in the already crowded field of GOPers who hope to unseat Sen. Chris Dodd, has publicly admitted that he doesn't vote(!)

From Roll Call (via DailyKos):

In an interview with Roll Call, Schiff said he was new to politics and only recently registered as a Republican in Weston.

“I don’t know when the last time I voted was,” Schiff said. “You can’t blame me for any of the politicians. I didn’t vote for them.”

You're dead wrong, Mr. Schiff; you're EXACTLY the kind of person to blame if you are unhappy with your elected representatives!

You ARE the problem!

For a guy exploring a possible run for the Senate, he demonstrates the very antithesis of what a responsible voter should be! And he says so unashamedly!

I'm sure he'll be a big hit with the teabaggers and the anti-Dodd Republicans, because they've aptly shown their abdication of responsibility for the years of terrible leadership by Bush/Cheney that allowed all the excesses Congress is being forced to deal with today. But the FoxNews-sponsored so-called "populist anti-tax" movement is taking in lots of suckers and low-information voters (and non-voters, apparently) who can't think for themselves.

He was on NPR - He scares me more than any of the rest. He seems to believe we should have let all the banks, etc. fail.

This is akin to chopping off one's head to cure a headache: it does indeed do the trick, but the side effects are "somewhat severe".

And the hits keep coming:

It's an easy opinion to make, because you can't ever be proven wrong; and it appeals to the dummies who think that the banks all should fail.

But, what Twilight Zone episode have we entered when the LIBERALS are arguing for the banks, and the CONSERVATIVES are arguing against?

Is he the take all your money and buy gold guy?

No, he's the "let the Titanic sink" guy: he apparently thinks the government should have NO hand in the market...kinda like a 21st century Herbert Hoover (but with the Internet).

Silly libs, still in denial that it was government interference in lending and dictating to banks to lower lending standards that got us in to this mess in the first place. It's like you have no context to anything, the world began in 2000 when Bush got elected and he turned in on end all with the help of his buddy Cheny. You might want to turn off the cartoon channel for a minute.

Your buddies Barney Frank and Chris Dodd were out there demanding hands off Freddie and Fannie since they were they were being used as instruments to help poor folks buy homes. Great plan that turned out the be, huh?

Schiff makes complete sense to those who have any (libs not included) which is why so many on the left fear him.

You seem to have some valid opinions. Why don't you start your own blog? Might I suggest a title?

How about "My Right Teabag"?

That's right, liberals abhor contrary opinion. Don't worry though, I don't plan to hang out long in the CT Blob echo chamber. It doesn't look like anyone does either....

By the way, are the same "Crack Head Bob" of Howard Stern fame? Can't be since that Bob can hardly string two sentences together. Then again...