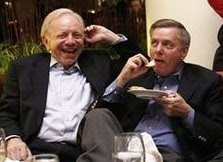 The pissy fit by "friend of torturers" Joe Lieberman has begun!

With his GOP soul mate and BFF Lindsey Graham at his side, Joe Lieberman is confidently stepping up to throw a wrench into the works of government. This just in from Roll Call:

Sen. Joe Lieberman (ID-Conn.) and Sen. Lindsey Graham (R-S.C.) threatened to hold up any and all legislation in the Senate until Congress passes its legislation to prohibit the release of photos showing detainee abuse in Iraq and Afghanistan.

“We’re not going to do any more business in the Senate,” Graham said. “Nothing’s going forward until we get this right.”

Both Senators said they were alarmed that a House-Senate conference committee on the supplemental war spending bill appears poised to eliminate language — inserted by the two Senators — that would block public disclosure of detainee abuse photos. The $90-billion-plus bill has been held up, in part, because House Democratic leaders have said they do not have the votes to pass it with the detainee photo provision included, because many liberal lawmakers have balked at the language.

So, this is the absolute most important thing to our cold-blooded reptile of a junior senator!

Not health care, not the economy, not jobs, not anything else. Apparently, it's "fuck all that noise" to Lieberman.

No, the single most important thing to Joe Lieberman is to shield his favorite past-president from possible war crimes investigations, and (by the way) attempt to wipe his own bloody fingerprints off the policies that he so enthusiastically supported and indeed, helped enact!

And Harry Reid, doing his best imitation of a shit sack in a threadbare suit, is working in collusion with the toxic twins.

Jesus H. Christ! I honestly thought that when the Democrats earned such a huge majority in both houses, they'd actually do something about Lieberman.

...they bent over and kissed Lieberman's ass so thoroughly that he'll never get all the Chapstick out of his trousers.