Here's a teaser for the NOW video from earlier today. It's a 30-second snippet, showing Ned's reaction to the map graphic originally shown on this blog. I'll have a more detailed video up late tonight. 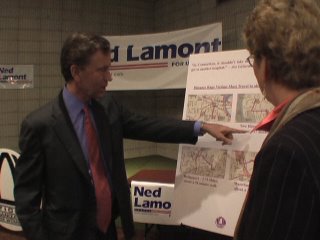 "'It shouldn't take more than a short ride to get to another hospital'...wasn't that the most callous thing you've ever heard?"

I knew you'd like that. I advised Kathleen Sloan to use your maps. They looked great on the giant poster boards.

Thanks, I appreciate it. In the longer video (uploading right now) Ned seems to be shocked at the galvanizing effect of Joe's awful words. People all over are disgusted with that statement.

I bet Joe is wishing he'd thought about it before opening his mouth.

How much longer 'til the full vid is posted?