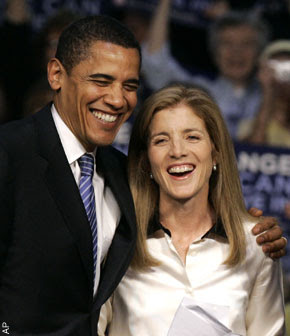 She's reportedly getting support on this from the President-elect. I gotta admit, the suggestion that JFK's daughter Caroline fill departing Senator Hillary's seat is somewhat intriguing. On the surface it looks like a good enough idea. Only when you look at the situation a little closer does it raise some questions.

Jane Hamsher wrote an article yesterday called "Caroline Kennedy? Thanks But No Thanks" where she discusses some significant reasons why Caroline shouldn't just be handed the seat. Specifically, Jane mentioned she's never even run for political office, let alone held an office, and there's no way of knowing if she'll handle the pressure of being a Kennedy in a very public situation where she'll be open to criticism like she's never been before. If she can't handle it and folds, it'll become a huge rallying point for the right.

Plus, there's the issue of entitlement in the Senate that most of us have a big problem with. Sure, we all love the Kennedys, but isn't it a little hypocritical to simply give this important office to someone who, if she didn't have the Kennedy connection, wouldn't even be considered for the job? Is it possible that there's a bit of the vague yet enduring romantic notion of "Camelot" stirring in our unconscious collective mind that makes her such an attractive choice to us?

On the plus side, Caroline's senate job would benefit from that very same Kennedy connection. She's the heir apparent to all that political good will the family has accumulated over the decades. The NY Post reports as much:

Powerful senator and family patriarch Ted Kennedy has been working back channels to promote niece Caroline as the replacement for Hillary Rodham Clinton in the Senate, family sources told The Post.

It will be interesting to see how this story develops. I think she's probably got a one-in-ten chance of getting this, as there are certainly more experienced candidates circling the governor's office. And as reported in the same article:

A Paterson-administration source said that because of Caroline's limited political experience, she is "barely in the game."

We need leaders who know what is going on. We do not need inexperienced feel good selections. My God look at the state of the country.

I tend to agree.

However, when you consider how we have a Congress filled with roughly 90% incumbents, and yet they STILL somehow got us into the mess we're in today, there's something to be said about bringing in someone from outside of DC for a change.

My primary concern isn't her lack of "experience"; I think any relatively intelligent person with good judgment can be a good senator. No, it's more of a question of "does she have the fortitude to withstand the almost daily attacks she'll likely get from the right?"

If she can't, it would be a terrible turn of events.

I don't get what you are afraid of. Do you thin she might turn into a right-winger because of the attacks? Have a nervous breakdown? Not take courageous stands (like 96 other Senators?)

Anyone else chosen will make going along to ge along and being re-elected their highist priorities.

The only one for the job is Elliot Spitzer. I love controvery. J.C. Sr.

She hasn't been vetted at all in the traditional sense; and even Al Franken, while never having held office before, has endured many months on the campaign trail and the close, often unfriendly scrutiny of the media. He's held up well, IMO.

Plus, I find the idea of her being rewarded the seat simply because she's part of "American nobility" to be a little distasteful. Even Hillary Clinton, who was probably the most powerful woman in America in 2000, had to run and win the seat (although being Mrs. President Bill Clinton probably didn't hurt much).

J.C., LOL! Spitzer would be a GREAT choice! But do you think Silda would let him move to DC without her watching his every step?

Al Franken is a professional comedian, a trade that only the toughest can survive. No wimps.
oldswede

Her "lack of experience" might be a good thing.

Further, she's kept herself far enough away from her numerous idiot cousins well enough that she's avoided their problems as well. (No stories of Caroline abusing people she encounters or any wild tales of drunken escapades.)

Her mother had a load of class and was a generous gracious woman - chances are Caroline is too.

New York could do worse in the U.S. Senate, and often has.

Now....if we can just figure out how to get Vermont's Senator Leahy some goofy job in the new administration......

Sorry for the double post I should have included this above:


""does she have the fortitude to withstand the almost daily attacks she'll likely get from the right?" "

She won't get any; she has always enjoyed a special "pass" of some sort.

Caroline would have to become quite disagreeable, argumentative and absolutely bitchy before even the rudest Republican would take so much as a pot shot at her politically.

Gee, what a shock a rich capitalist whos only qualification is her pedigree, to be appointed to the senate. And you fools STILL think your so called democracy will survive the workers revolt?

ACR - I'm quite surprised to hear you speak positively about a Kennedy! I didn't think you had it in you. LOL!

While I know YOU wouldn't engage in any general attacks on Ms. Kennedy, I don't think the right-wing blogosphere will share your restraint, should she be selected. Maybe I'm being cynical, but I can't imagine otherwise. Do a Google search on "impeach Obama" if you want proof the righties can be even nuttier than us!

If you haven't already, go and read the articles I've linked. There's some convincing arguments in them that deserve consideration.

Anonymous - Really, you SHOULD start your own blog! The first step towards revolt is publicizing your cause. More people will read your words if you start a blog called "AngryYoungDouche.blogspot.com"!

>>I'm quite surprised to hear you speak positively about a Kennedy!

She and her late mother have always had a pass.

While the rest of the clan was running around the Cape being generally obnoxious (no Kennedy carried even a single polling place on Cape Cod until late in the 1970's) and "charging" things to the compound; Caroline was never around for any of that, and her mother was the only one that would zip around collecting the bills near Labor Day making sure the retailers got paid.

The rest of them are a pack of arrogant assholes - and *yes* I do know what I'm talking about.