The Minnesota Senate race recount is still going on, with each contested ballot being carefully examined and voted upon by a board of state officials, including Sec. of State Mark Richie. The recount is periodically streamed online at TheUptake.com.

Now the Minneapolis-St. Paul Star-Tribune is adding to the collection of online data by publishing actual ballots to show what the canvassing board is dealing with.

The total transparency of this process is ground-breaking. Every step of the recount is being made available to the public, which helps keeps the process honest and above reproach. This isn't a case like Florida 2000, where some people accused the recount officials of creating votes by punching out "dimpled" or "hanging" chads. Fortunately, the paper ballots are fairly simple to read and interpret.

The board agreed to a certain framework to determine the voter's intent in cases where the optical scanning machines couldn't read the ballots properly. For instance, when an "X" is placed over the circle rather than filling it in completely, the machine might not register it as a vote but the intent of the voter is usually quite clear. By agreeing upon a standard of interpretation, the two candidates are less likely to dispute individual ballots after the recount concludes.

Here's several examples from the Star-Tribune: 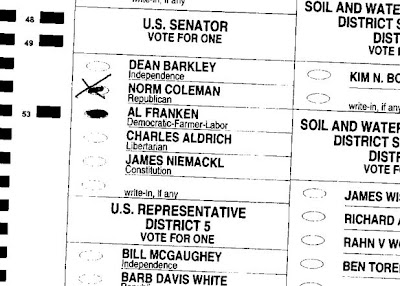 The ballot above would be considered a vote for Franken, because the voter obviously marked the oval for Coleman by mistake and then crossed it out, then filled in Franken's oval. The entire ballot is shown online, so you can see how the voter filled in the other ovals on the ballot. If he used "X's" to vote for other offices, the vote would probably have been awarded to Coleman, or disallowed as ambiguous. But on this particular ballot, the remainder of the ovals are filled in completely and not "X"-ed out. 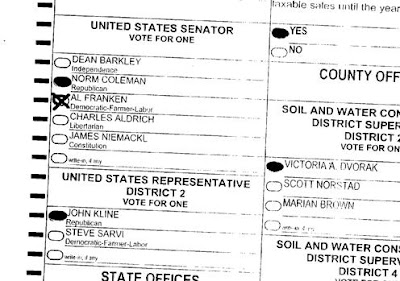 This is a vote for Coleman. The optical scanner would probably have recorded this as two votes for the same office, which is known as an "overvote" and would have been automatically voided, at least as far as the Senate vote goes. But the board was able to determine the obvious intent of the voter, so his/her vote counted. This kind of care helps the cause of democracy. 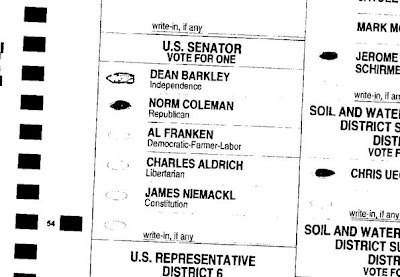 Despite the stray mark in the first oval, the intent of the voter was obvious and this is a vote for Coleman.

The importance of this process being completely transparent is that it will help restore citizen's confidence in the system. As long as other factors involved such as the chain of custody of the ballots has been properly observed, there's little doubt that the final results of this election will stand above suspicion.
Posted by CT Bob at 12/24/2008 08:44:00 AM