Last Senate race of the year

Tomorrow is the final election of the year (barring a redo or something similarly weird in Minnesota) for the Senate seat from Georgia.

Sen. Saxby Chambliss pulled out the big gun today, with a campaign appearance by none other than losing VP candidate Sarah Palin. Democratic challenger Jim Martin urged voters who came out for Barack Obama last month to show up tomorrow. However, McCain/Palin won Georgia 52-47%, so Martin may need a little help to win. 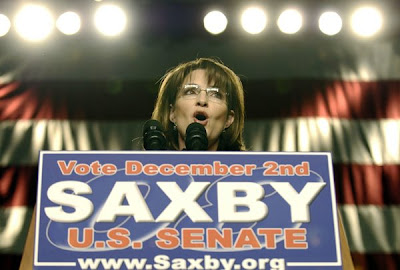 It's going to boil down to who is more motivated among GA voters; those who want real change by getting the Senate Democrats one step closer to the magical 60 votes needed to kill any GOP filibusters, or those who want to stick with more of the same - the pro-gun, anti-choice, stomp on your civil liberties crew.

Saxby (where do these hicks get their names, anyway?) has been getting a lot of help from the national Republicans, who are anxious to retain even the slightest chance at a filibuster for the coming two years. It'll be interesting to see who shows up at the polls tomorrow.

That is quite the contrast.

It's going to boil down to GOTV. I suspect that the recent flood of GOP support for Saxby is going to help him hold his edge.