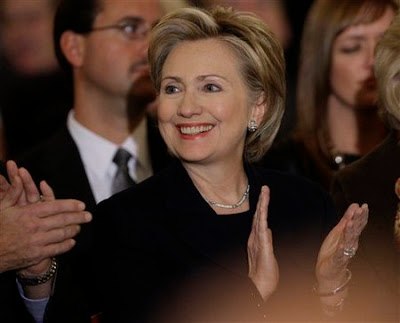 Tomorrow we'll likely hear the official announcement by Barack Obama that he's chosen Sen. Hillary Clinton to be the next Secretary of State.

There are already plenty of conservative pundits expressing their outrage at the very thought, and I'm even hearing occasional rumblings from the progressive blogosphere. Let me make just one suggestion:

Give it a chance, will ya's? Obama isn't even sitting in the Oval Office yet, and a lot of people are basically freaking out. Let's give the new administration the typical "100 Days" to settle in and grow into their own leadership style. If, after three-and-some months things ain't going exactly as you please, then feel free to complain, whine, bitch, and moan to your heart's content.

After eight years of disastrous leadership, Obama deserves a few months leeway before you guys start your drum roll. At this moment in history, Barack Obama has the unique opportunity to step up and become one of America's greatest leaders, and he should get the chance to do so.

Oh, and an aside to Rupert Murdoch: if you hate Bill O'Reilly so frickin' much, then fire his sorry ass!

Otherwise, you're just another chickenshit hypocrite who desperately wants to be loved by the public. Same goes for Fox News chief Roger Ailes. I call bullshit on the two of you. You both reek from the stink of hypocrisy, caused by the phony "news" network you shamelessly claim to be "fair and balanced". If you crave respect, how about earning some, rather than wistfully hoping for it?

For heavens sakes, it could have been (Gasp! Oh no not that!) Kerry!

Go figure - if Obama's got both the far right and the Kos Kool Aid for lunch bunch upset with this choice; how bad can it be?

Hopefully the MLN crowd, fearing heart attacks, are reaching for their nitro tablets.

We'll see how he does once he's in office; but his choices thus far haven't been anywhere nearly as horrible as many of us on the other team had expected.

tell ACR: Duh. We all knew Obama is a "moderate", we are just hoping he will lean Left as much as possible. Our job is to keep his feet to the fire ...and put a thorn in his side ...and be a pain in his neck ...and...well...you get the idea.

More so than Clinton, I think the Gates pick really surprised folks on both sides. It's a very shrewd move if you ask me, and it confirms Obama as something other than the partisan player that many on the right feared. It's encouraging to see how measured and thoughtful Obama seems to be, especially after the ultra-reactionary Bush.

If my dauthers and I were younger and still listening I would tell them. Just be like Hillary. I voted for her in the primaries and when the rest of you went for Obama I switched fast. I love Hillary. she's got more "B's" than Sara. No, not those "B's" - Brains. J.C. Sr.

"More so than Clinton, I think the Gates pick really surprised folks on both sides..."

However, despite Tessa's claim of "We all knew Obama is a "moderate"...."

His record in the Illinois legislature was hardly anything `moderate'.

Look - as a descendant of Abolitionists with a GG grandfather that was instrumental in the "Underground Railroad"; nothing would please me, (or for that matter most Republicans I know) more than for the first Black President of the United States to turn in a fabulously successful term.

At the very least, Obama can get Clinton to answer all those damned 3:00 am phone calls.

He will fail just like the other capitalist lackeys. clinton is a war monger she gleefully voted to allow the american gestapo to murder people of color throughout the world. obama wants to continue the american gestapos rapine and murder of afghani civilians. change? I think not.

Dude, give the new administration a fucking chance, will ya?

If our system sucks so badly, why don't you move to a country that has a government more to your liking?

May I suggest Cuba? I hear things are going swell down there.