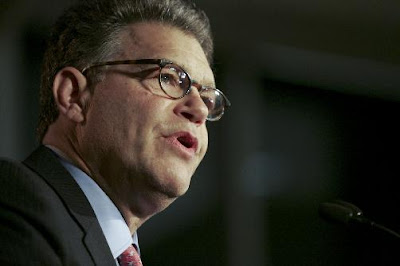 But there's also the issue of many "undervotes", where people clearly marked their ballots in the presidential race, but for some reason a vote wasn't registered in the senate race.

Often, this kind of thing can be attributed to either the voter only interested in the presidential ticket, or they made a mark on the senate candidate's oval that was unreadable by the optical scanner. This usually translates to someone putting a checkmark in the oval, or circling the oval, or filling in the wrong oval then crossing it out and filling in their proper choice, all of which will register as a non-vote. The machines are set to accept a ballot if there is one good vote on it, even if they fully intended to vote for their choice for senate by, say, circling the candidate's name.

From the Star-Tribune (AP):

An Associated Press analysis of the nearly 25,000-vote difference in Minnesota presidential and U.S. Senate race tallies shows that most ballots lacking a recorded Senate vote were cast in counties won by Democrat Barack Obama.

The finding could have implications for Republican Sen. Norm Coleman and DFLer Al Franken, who are headed for a recount separated by the thinnest of margins -- 221 votes as of Friday, or about 0.01 percent.

Though some voters may have intentionally bypassed the race, others may have mismarked their ballot or optical scanning machines may have misread them. A recount to begin Nov. 19 will use manual inspection to detect such ballots.

Obama won by a huge margin in many areas where there were significant non-votes for the senate race. This will likely contribute to a long and exhaustive recount, where "voter intent" will be a matter to be judged individually on perhaps tens of thousands of the inconclusive ballots. Minnesota may be headed for a nightmare similar to the 2000 Florida recount. I'm assuming that lawyers in the state are already working on the flood of lawsuits that will inevitably follow.

Just came across this and thought it was interesting....

You be the judge.

If you did not know what it felt like to be a poll worker weeks after the election, maybe now you do.